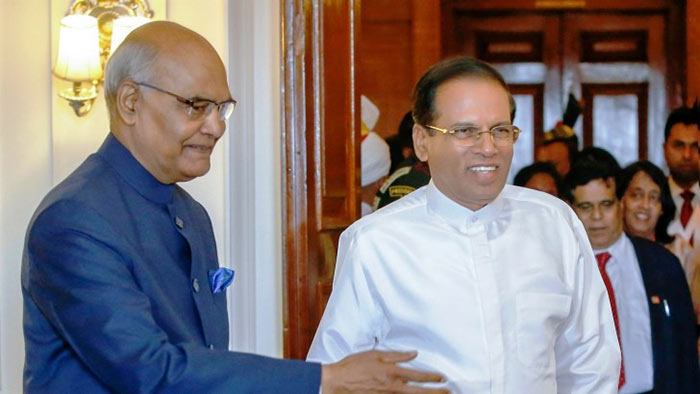 The Indian President Ram Nath Kovind says the current President Maithripala Sirisena has been able to deliver long term benefits to Sri Lanka while establishing peace and reconciliation in the country.

He made these remarks during a meeting with President Sirisena held at the Rashtrapati Bhavan (President’s House) , yesterday (10).

During this meeting, the Indian President appreciated the steps taken by the President to protect the environment and said that he later get to know that at present Sri Lanka is successfully moving towards solar energy .

President Sirisena said that holding this kind of Conference, in this present context, where the whole world is facing energy crisis as well as global warming, is a timely initiative.

The President also made this an opportunity to express gratitude to India for providing their assistance during the 30 year long war period and later in development activities in the North and East as well as in the fields of housing, health, education, irrigation and cultural affairs.

President Sirisena mentioned that by now comprehensive projects have been implemented to strengthen the peace and harmony in Sri Lanka as well as to develop the economy of the country. He further stated that it has been identified that certain extremists are trying to destroy harmony in Sri Lanka through various clamorous activities.

Even though, the clamorous situations which took place in past few days in certain areas of the country has completely controlled and the peace has already been established, the President explained to the Indian President.

Indian President accepted the invitation extended by President Sirisena to visit to Sri Lanka and said that he expects to undertake the visit in near future.