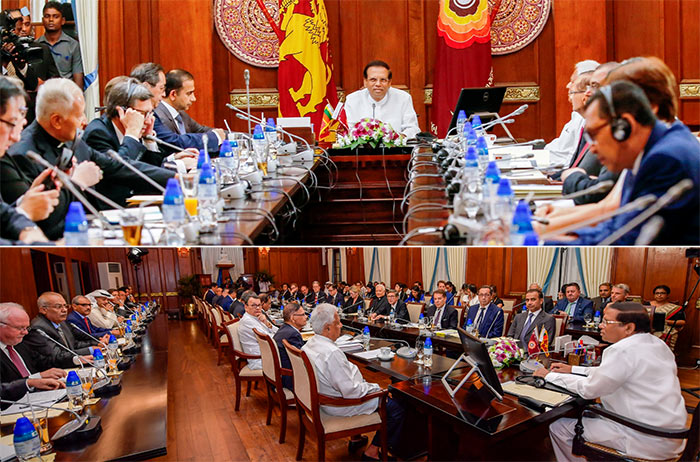 President Maithripala Sirisena held a meeting with foreign Ambassadors and High Commissioners in Sri Lanka at the Presidential Secretariat yesterday (29), to apprise them regarding the prevailing political situation of the country.

During this meeting, the President explained to the diplomats regarding the conflicting grounds existed within the previous government, which led to appointment of a new Prime Minister.Several diplomats expressing their views said that they wish Sri Lanka would adhere to the constitution of the country and will conduct the activities in a manner that would assure law and order in the country.

President Sirisena emphasized that the new Prime Minister was appointed according to the powers vested in him in the constitution and further said that the new government is expected to further strengthen the existing ties with the countries in the world in keeping with the non-aligned policy and requested the cooperation and assistance of all the countries for the development activities of the government.

The President also said that the expectation of the new government is to ensure and take forward the measures taken to strengthen democracy, human rights, media freedom, peace and reconciliation among all the communities.

All the Ambassadors and High Commissioners in Sri Lanka participated in this meeting and Ministers Sarath Amunugama and Mahinda Samarasinghe and former ministerProf.G.L. Peiris also attended in this meeting