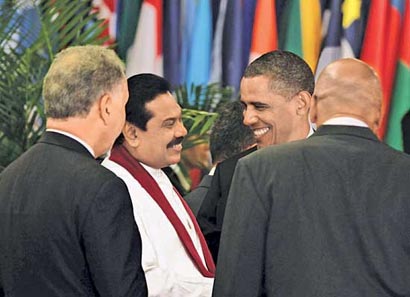 President Mahinda Rajapaksa had bilateral talks with the Heads of State of Nepal, Colombia and Iran yesterday, states a Presidential Media Division press release. At these talks, President apprised these Heads of State about the progress achieved in the resettlement of displaced persons, demining work in the North and East, and reconstruction programmes and also about the Local Government elections held in the Northern and Eastern Provinces.

The President also emphasized the massive development projects being implemented in the country.

At the talks held with Nepalese Prime Minister Dr Baburam Bhattarai, President Mahinda Rajapaksa said direct air travel will be started between Colombo and Lumbini. He recalled his role in the development of Lumbini as a young Parliamentarian. Both leaders emphasized the significance of strengthening bilateral trade links between Sri Lanka and Nepal.

Colombian President, Juan Manuel Santos Calderon expressed that he was aware of Sri Lanka’s situation. In the context of Colombia’s experience in identical circumstances he noted that Sri Lanka has achieved success in the reconciliation process.