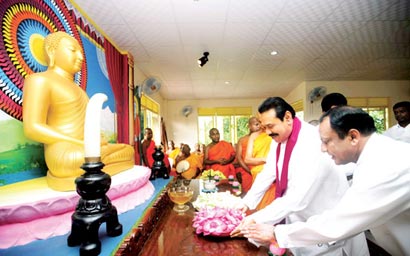 The Buddha Mandiraya built on the instructions of the Chief Sanghanayake of the Hinidumapaththuwe Galu Korale and Samadhi Buddhist Centre Chief Incumbent Mapalagama Budasiri Nayake Thera, was opened to mark the 2600th Sambuddhatva Jayanthi. The President also launched a web site.

The construction of this Buddha Mandira was the brain child of President Mahinda Rajapaksa when he was the Opposition Leader.

Samadhi Buddha Mandiraya in Ratmalana Kothalawalapura was constructed with donations of local and foreign devotees.