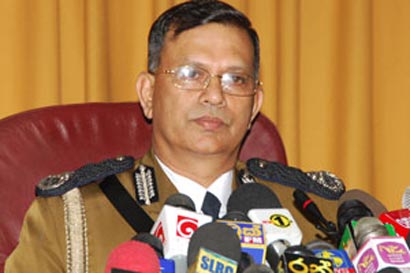 IGP N K Illangakoon said that the arresting of a suspect in connection with the mysterious killings in Kahawatta region was possible due to public help. He said another suspect is to be arrested soon.

Seven murders were reported in the last three years in the region and most victims were elderly women who lived alone. Killings from July 20, 2008 to June 19, 2011 had resulted in tension and fear among residents of Kahawatta. Briefing the media at the Police Headquarters yesterday, to explain measures taken by the police and Security forces to restore normality and arrest the suspects, the IGP said Defence Secretary Gotabhaya Rajapaksa ordered to take all possible action to prevent further killings and arrest all those involved immediately.

The Police, STF and Army were deployed in Kahawatta and they were alert till the killer was caught. With the support of public, Police arrested the suspect, a former security forces member, suspected of carrying out killings, he said.

According to initial police investigations, the suspect had confessed that he involved in three killings.

”These were not organized killings. Three persons were involved in these killings and no connections have been maintained by these killers. Killings have been for personal satisfaction or to take revenge from the victims,” IGP Illangakoon said.

Media Centre for National Security Director General Lakshman Hulugalle said media had been reporting about a series of deaths in the area, but the incidents had occurred during a three year period.

”Some media portrayed that these killings were as a result of in-human activity. It further aggravated the situation among the public creating unrest among the residents. Therefore, the media should be responsible in delivering the correct picture to the public,” he added.