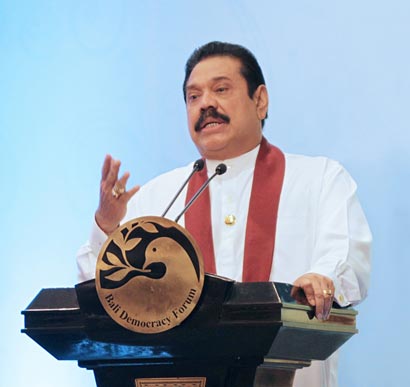 President Mahinda Rajapaksa said, our strong commitment to democracy not only as a system of governance but as a way of life is one of the most significant strands that run through the value systems of all the countries represented here. In a world where every aspect of life is subject today to basic transformation, it is, however, a constant challenge to ensure that our practice of democracy remains at all times responsive to the priorities and aspirations of our people, so that their confidence in the system is continually strengthened.

The President made these remarks at the inauguration ceremony of the 4th Bali Democracy Forum at the Bali International Conference Center in Nusa Duwa in Bali Island. President Rajapaksa visited to Indonesia at the invitation of the President of the Republic of Indonesia, Dr. Sicilo Bambang Yudhoyono and addressed the Forum today on 08 December.

Addressing the Forum the President further said that Sri Lanka is one of the oldest democracies in the world and the bedrock of Sri Lankan approach to democratic governance is the Pancha Maha Balavega – the Five Pillars of society symbolized by the priest, the teacher, the physician, the farmer and the worker. They constitute, collectively, the nation’s lifeblood. In our view, relevance and acceptability of government postures and, indeed, the principal directions of government policy, demand that faith be always kept with the identity and mindset of the people.

Speaking further he said that education holds the key to such social development in the today’s modern world and students, apart from enjoying free education from kindergarten to university, are assured of the benefit of assistance all they need throughout the period of their educational career in Sri Lanka.
Delegates representing Sri Lanka, Minister of External Affairs, Prof. G.L. Peiris, Parliamentarian, Sajin Vas Gunawardena, Secretary to the President, Lalith Weeratunga, High Commissioner for Sri Lanka in Indonesia, Major General Nanda Mallawarachchi and the Governor of the Central Bank, Ajith Nivard Cabral participated the forum.

Pictures are seen here, President Rajapaksa is being received by his Indonesian counterpart, Dr. Sicilo Bambang Yudhoyono, inauguration ceremony of the Fourth Bali Democracy Forum, President addressing the Forum and all the Heads of State, Representatives of other participating States and observers who posed for a group photograph.

Full text of the President Rajapaksa’a speech as follows

President of the Republic of Indonesia and Chair of the Bali Democracy Forum,
Her Excellency, Sheikh Hasina Wajed, Prime Minister of Bangladesh and Co-Chair,
Excellencies,
Distinguished Invitees,
Ladies and Gentlemen,

It is my pleasure to express warm appreciation of the invitation extended to me by His Excellency Dr. Susilo Bambang Yudhoyono, President of the Republic of Indonesia, to participate in the Fourth Bali Democracy Forum. I would like to thank the Government of Indonesia for the excellent and very thoughtful arrangements which have been made to host this important Forum in the enchanting surroundings of Bali.
In a world where every aspect of life is subject today to basic transformation, one of the most significant strands that run through the value systems of all the countries represented here, is our strong commitment to democracy not only as a system of governance but as a way of life. It is, however, a constant challenge to ensure that our practice of democracy remains at all times responsive to the priorities and aspirations of our people, so that their confidence in the system is continually strengthened.

It is for this reason that I regard the theme which has been chosen for this symposium “Enhancing Democratic Participation in a Changing World: Responding to Democratic Voices”, as entirely appropriate.
In view of the vast and varied range of experience which distinguished delegates bring to bear on this Forum to enrich its proceedings, I thought that the appropriate contribution I could make on this occasion is to comment on some features of democracy which have been developed and applied in my country in a special way.

It is a matter of deep pride to us that Sri Lanka is one of the oldest practising democracies not only in the Asian continent but in the world at large. Our people have enjoyed universal adult franchise since 1931, and they have been accustomed, without interruption, to electing and changing governments in an entirely orderly and peaceful manner for eight decades. Even under the LTTE threat we were continuing election.

It is worthy of note that Sri Lanka is the first country in Asia to have accorded women the right to vote, and they secured this right just two years after the en-franchise-ment of women in the United Kingdom.
The diversity of Sri Lanka’s experience of constitutional and electoral systems is probably unique in the annals of political history. Our country has been governed under both the Westminster style Cabinet system and the Executive Presidential system which was introduced into our public law in 1978.

We have had experience of the first past the post electoral system, which continues to operate in many of the countries participating in this Forum, as well as a version of proportional representation which applies in Sri Lanka today. We are now contemplating a hybrid system, combining elements of both these approaches, as the solution best suited to the needs and circumstances of our country. The sum total of these comparative approaches has imparted to us a maturity of outlook and a breadth of vision which have greatly enriched our political culture.

It has always been important to us to ensure that the forms and institutions of democracy, far from being an ideal remote from the people, should be part and parcel of their experience. If democracy is to be meaningful and command their respect, it must have a direct impact on their everyday lives. This necessarily calls for the closest possible interaction between government and the community. The mechanisms of government must have effective application at the grassroots level, in order to address issues and to provide relief.

This is an area in which the political traditions of Sri Lanka have special vitality. In our home-grown structures, which flourished before the advent of Western colonial powers, pride of place was given to the gamsabhas. These functioned as vigorous local government bodies, consisting of leaders of the local communities, and dealt with issues in a practical way to arrive at solutions before problems assumed serious proportions. There was a court official who conveyed hardships and injustices faced by the people to the ruler to which ample reference is made in our literary and sociological texts, this fore-shadows the role of the Ombudsman in Scandinavian countries, the Parliamentary Commissioner for Administration in the United Kingdom and the Lokpal in India. Its essence was amicable settlement of disputes in the village through mediation and conciliation, rather than resorting to litigation, with its accompanying bitterness and hostility.

The village temple, as the central focus not only of spiritual faith, but of the educational process and cultural pursuits, served as the pivot of social organization. Our ethical beliefs relating to governance derived primarily from the dasa raja dharma, or the fundamental moral norms of governance, laid down by Gautama the Buddha in the Dhammapada.

This spirit of amity and togetherness, and the tradition of sharing both joy, and sorrow among neighbours, families and the community formed the inspiration of our indigenous social structures and deeply influenced our practice of governance over the centuries.

The Party which I have the honour to lead, the Sri Lanka Freedom Party, seeks to capture the substance of this people-oriented and people-serving tradition by insisting that its basic attitudes must stem from the instincts of the people and the values rooted in their culture. It is only then that governments give expression to the ideas and sentiments of the nation, “responding to democratic voices”, in the apt words of the formulation of the theme of the Bali Forum.

The bedrock of our approach to governance is the p  Pancha Maha Balavega – the Five Pillars of society symbolized by the priest, the teacher, the physician, the farmer and the worker. They constitute, collectively, the nation’s lifeblood. In our view, relevance and acceptability of government postures and, indeed, the principal directions of government policy, demand that faith be always kept with the identity and mindset of the people.

In order to achieve this, it is our firm belief that the first and essential task of a democratic government is to make the fullest possible provision for access to opportunity on a just and equitable basis. We have seen to it that social mobility is not confined to the privileged in the towns and cities of the country, but penetrates deep into the rural sector.

It is also worth noting that Sri Lanka’s economic and trade relations with distant lands are vividly portrayed in literature, even in times of antiquity. Examples are provided by the writings of Ptolemy and Pling the Elder. Our country’s ambassadors were received with honour in ancient Rome. What emerges from this historical evidence is a vibrant economy, a contented society and a stable system of governance. We also had a system of governance and administration where tax collection and revenue administration were at an advanced state.

Education is the key to social advancement. A contribution of unique value which my country has been able to make to social development in the field of education, is the innovative scheme in terms of which students, apart from enjoying free education from kindergarten to university, are assured of the benefit of assistance from the State with regard to provision of all their needs, including board and lodging, books and incidental expenses, throughout the period of their educational career. This is undoubtedly the basis of the social transformation which has taken place in recent times in our country, resulting in levels of achievement not only in respect of education in the conventional sense, but also computer literacy and skills development in contemporary fields, without parallel in the region.

I hope these reflections on Sri Lanka’s experience will be of some interest to the distinguished delegates gathered here in Bali for this timely and valuable Forum. I wish your deliberations every success.

May the Noble Triple Gem bless you all! 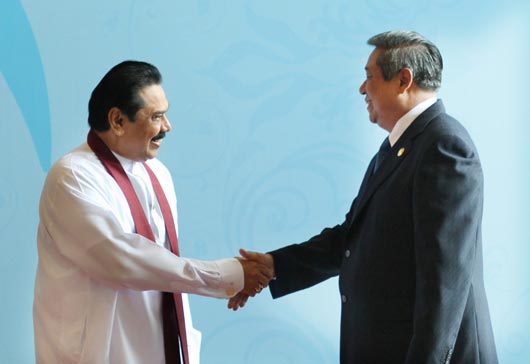 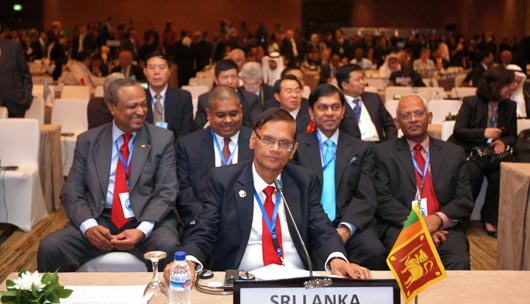