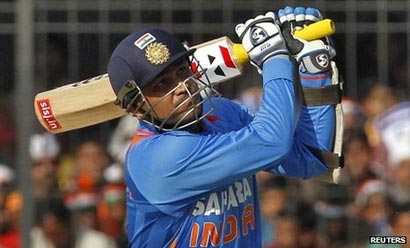 India opener Virender Sehwag has hit the record one-day international score after smashing 219 from 149 balls against West Indies in Indore.

His team-mate Sachin Tendulkar, rested from this series, previously held the record after hitting an unbeaten 200 against South Africa in 2010.

He finally holed out in the 47th over after hitting seven sixes and 24 fours.

The right-hander’s best score in his 239 previous one-dayers was 175.