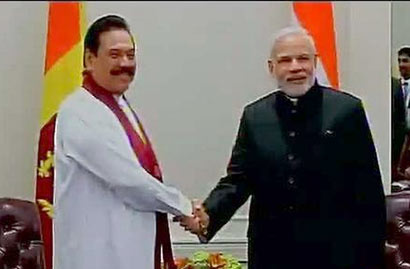 In a cordial discussion, the two leaders spoke about a range of matters of mutual interest to the two countries.

Regarding the recent meeting the Indian leader had with Sri Lanka’s Tamil National Alliance (TNA), the Prime Minister informed President Rajapaksa of the discussion that took place with the group. In that context, Prime Minister Modi acknowledged the importance of the Parliamentary Select Committee (PSC) process.

President Rajapaksa explained to Prime Minister Modi that the Government has always been ready to engage in talks with all political parties, including the TNA, for which a mechanism has been established in terms of the PSC.

The President also briefed the Prime Minister on the ways in which the Government is assisting the Northern Province, particularly with the financial resources in the amount of Rs. 1.5 billion that has been made available in this year’s budget.

On the issue of fishermen, both leaders agreed that the matters must be handled carefully since there are sensitivities among all concerned parties. President Rajapaksa reiterated his concerns about the practice of bottom trawling.

“Bottom trawling is the biggest problem,” President Rajapaksa said. “Now it is an illegal practice. We have banned bottom trawling for Sri Lankan fishermen. It’s creating permanent damage to the sea bed and resources.”

“We have to live together, so we must help each other,” Prime Minister Modi said in response.