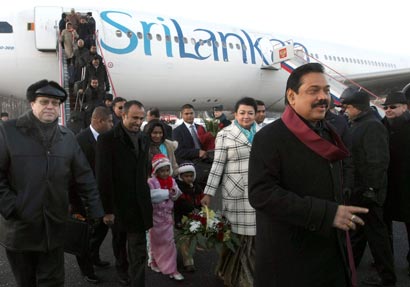 This afternoon President Rajapaksa will be awarded an Honorary Doctorate by the People’s Friendship University of Russian Federation (PFU), formally known as Patricia Lumumba University for his contribution for world peace and outstanding success against defeating terrorism. The PFU is celebrating its 50th Anniversary and to mark this special occasion it has been decided to award the Honorary Doctorate to the Sri Lankan President. After the award ceremony a special reception will be held at the Great Kremlin Concert Hotel in Moscow.

During President Rajapaksa’s three day official visit, there will be a bilateral discussion with his counterpart President Dimithri Medvedev. He is also scheduled to hold talks with former President and the present Prime Minister of Russia Vladimir Putin, other government officials and the business community.

Sri Lankan Ambassador for the Russian Federation Mr Udayanga Weeratunga was present at the Moscow airport to welcome the President and his team.