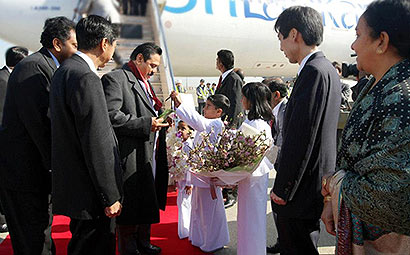 During the visit, President Rajapaksa is expected to hold discussions with Prime Minister Shinzo Abe and have an audience with the Emperor and Empress of Japan who will also be hosting a lunch for the President and the First Lady at the Imperial Palace.

President Rajapaksa is scheduled to host a breakfast meeting for leaders of Japan’s corporate and industry sectors as well as attend the inaugural ceremony of the Sri Lanka Business Forum.

In addition to several bilateral meetings with Japanese ministers and government officials, President Rajapaksa is also scheduled to attend a meeting of the Japan-Sri Lanka Parliamentary League and meet with Ambassador Yasushi Akashi.

Minister of External Affairs Prof. G.L. Peiris, Minister of Irrigation and Water Resources Management Nimal Siripala de Silva, Monitoring MP for Ministry of External Affairs Sajin de Vaas Gunawardena, Secretary to the President Lalith Weeratunga and Governor of Central Bank Ajith Nivard Cabraal are among the Sri Lankan officials, along with a business delegation, accompanying the President on his second official visit to the country.