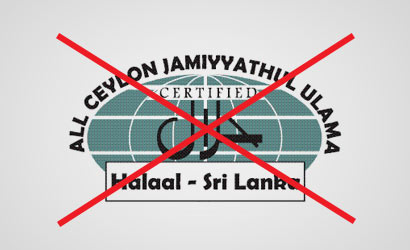 A huge sigh of relief prevails in Sri Lanka. News welcomed by every right thinking person followed by the announcement to remove the Halal certificate/logo from local products. Nobody needs to feel ashamed. It must be seen in terms of triumph for wisdom and common sense, or in other words a win for both sanity and rationality. The most important lesson emerging from this dispute is the dawning of wisdom that without the consent and prior approval of people of the older culture controversial and new practices of people of later or newer cultures cannot be simply absorbed or sustained by purely evoking universal tenets of freedom of religion. This together with the future possibility that it would create divisions amongst the Muslims themselves as is seen unfolding in different parts of the world is what prompted the issue to surface. In hindsight the Muslims of Sri Lanka will be thankful.

Buddhists asked to mind their own business

Sri Lanka becomes the only non-Muslim nation to have articulated the practicalities of halal certification and to have amicably brought the chapter to a close allowing people to perhaps review and to reassess actions and behaviors detrimental to the main objective that being peaceful coexistence. Nothing should come in between the desire to live in peace amongst the communities and no new religious practices previously non-existent should hinder or obstruct that. Intelligently debating issues is for all reasons a preferred option. Likewise Mr. Hameed Abdul Karim and I chose that path to which Mr. Zubair and Mr. R M B Senanayake  contributed with their views. Mr. Zubair’s response fortified the fears that were projected whilst R M B Senanayake was of the view that the Buddhists should mind their own business as they had been doing in the past reinforcing the Colombo non-Buddhist general view that the voice of Buddhists need not matter. It is a well-structured gameplan that aims to target international audiences who are ever ready to build upon their prejudiced assertions.

The manner with which media operates in Sri Lanka is such that it is virtually impossible to have the Buddhist perspective of things balanced with that of the rest. Almost always as against one Buddhist view the media would give prominence to several opposing views all uniting to conclude that Buddhists were on a witch hunt when the reality was the reverse.  It was interesting reading how all these commentaries brought in arguments that were not only out of context but evasive in providing appropriate answers to the questions posed.

Halal certificate would have divided the Muslims

Sadly, without looking at the reasons clearly identified the opted course was to project a concocted anti-Muslim image on the part of those objecting trying to protect their traditional space though that did not explain why many Muslims living in Colombo saw the bigger picture in realizing that the fundamentalist Muslim behavioral pattern would invariably end up affecting how they lived as they saw happening in Egypt and Libya. The importance of the removal of the halal in essence has helped Muslims not be targets to the suffering that other Muslim nations now go through with sectarian violence that have been planted to divide them forever.

Both Muslims and non-Muslims in Sri Lanka have found the liberties they enjoyed slowly being taken away from them with strict application of tribal 5th Century rooted Islamic laws and practices. There was never a question of Muslims in Sri Lanka having to change anything and it was the Buddhists that saw the warning signs posing to the Muslims whether they wanted to face a situation like in Egypt at a future date. Many Muslims in Sri Lanka thankfully realize this and prefer peaceful co-existence over the rigidity and separation from the rest of the community being slowly introduced through new incursions like halal certificate, proliferation of mosques, new dress codes, loudspeakers, home slaughter, animal sacrifice etc all giving a statement that is unpalatable and discomforting to the rest of this country . Thus the current protests were to raise caution hoping that the Muslims of Sri Lanka would not fall similarly for those that were using Islam as a ploy to set different agendas that will internally divide Muslims, set Muslims apart and place the Muslims on a collision course with people of other races and religions in this country. The Muslims would one day be thankful to the Buddhists.

As for the halal certificate the comments by Mr. Karim did not answer how a certificate could validate the halal status since to declare anything halal the slaughter must be done by a Muslim and realistically people not of the Book (Hindus and Buddhists) cannot be associated with that activity.– in a non-Muslim Buddhist nation it is unrealistic to expect the whole food chain to be  controlled by Muslims to declare it as completely halal. A religious entity cannot dictate the eating patterns of others. Halal certification impracticality was the core principle argument behind the objections.

To avoid rational thinking and debate whereby Muslims themselves would understand the impracticalities of the halal in the context of what the Quran says is halal/haram the safer option was to project a non-existent anti-Muslim communal campaign. This would allow those with vested interests to unnecessarily arouse people’s emotions away from seeing the other side and accepting the other version of things. However, it has not succeeded  in erasing  the fundamental moral and ethical principle that religious rights can be acceptable to others only so long as they do not harm another. Religious rights have borderlines and religions need to be conscious of those borderlines especially in a nation where causing harm to another i.e. whether man or animal is non–acceptable. In pre- colonial Sri Lanka the abuse and killing of animals was totally prohibited “”maaghatha””Rule. People lost rank and status if they were associated with killing of animals and consumption of meat particularly beef. It was with the entry of the Portuguese in the 16th century that legitimacy was granted to the killing of cattle and eating of beef. Muslims would not have engaged in halal slaughter prior to 1505. People cannot forget this important aspect of history.

Objective is to create a compassionate society in Sri Lanka

In the Buddha’s eyes a person was judged by his conduct and not by his birth. Translated even a lowborn (so–called) can rise and behave as a Brahmin while a Brahmin can stoop low and engage in degrading conduct and become an outcaste. Our actions determine who we are.

In a Buddhist society the people who honor the Buddhist 1st precept and those who violate that 1st precept are not co-equals. In a moral and ethical sense too they are not equals. Those that revere life and those that do not have reverence for life (all forms of life) cannot be equals.

This was a critical basis of differentiating people. Respect for the sanctity of life was a binding requirement to gain acceptance in traditional Sinhalese Buddhist Society. Those who failed that test were relegated to the margins of society. Sub–Cultures that produced butchers and people who abused animals lived in the dark shadows of society, without status, without respect.

Buddhism provides advocacy for the moral rights of all sentient beings. No one is excluded. It is an inclusive religion that calls for compassion and ‘non–harm’ in our day to day dealings with others. It calls for peaceful co–existence between man and animal. It calls for extension of gratitude even to an animal if we have sustained ourselves from its labour or produce. It does not adopt an utilitarian attitude which is rooted in Abrahamic religions that when an animal after a long period of service to its master is no longer capable of continuing such service then it must be forthwith destroyed for its flesh.  The older culture of this country never subscribed to these attitudes. Buddhist values unequivocally sustain life.

In a world where populations are spiraling, food and water issues will emerge and our environment is being overtaxed where little reverence is paid to our ecosystems that give us air to breathe we need to reassess how far we humble ourselves to accept that just as we have a right to live the animals that have no voice to convey their pain also have a right to live until the end of their natural span of life.

The ideal society is a compassionate society. Buddhist teachings provides a framework for the establishment of an inclusive social order that will endeavor to work in the pursuit of this noble objective.