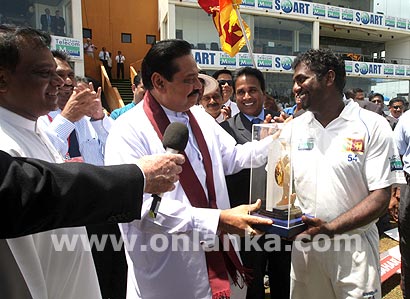 President Mahinda Rajapaksa made a special visit to the Galle International Cricket stadium this afternoon on July 22 and congratulated the spin wizard Muttiah Muralitharan (Murali) who made a World Record of 800 Test wickets on the final day of the first Test between Sri Lanka Vs India.

It was Murali’s last day of Test cricket and President Rajapaksa felicitated Murali by presenting a special memento at the Stadium for his achievements in cricket and contribution to cricket in Sri Lanka.

When the first Test started in Galle five days ago, Sri Lankan star spinner was in grasping distance of the World Record. He is probably the best test and one day bowler in the world.

Sri Lanka won the match by 10 wickets and Murali grabbed 5 wickets in the first innings and while in the second innings he grabbed 3 wickets to achieve the unique milestone of 800 test wickets. Muttaih Muralitharan who is retiring from test cricket was awarded for his excellent bowling as he reached a target of taking 800 Test wickets which was never achieved by any cricketer.

At the ceremony Murali said “I’d like to thank the president for coming to support me. Thanks to my wife Mathimalar and family for their support. My team-mates, past and present, the Cricket Board and officials and everyone else for supporting me through the 19 years”.

“I started playing when I was 8 years old and I still listen to my coach from school days. Arjuna Ranatunga and De Silva and all those guys helped me through the tough times in 1995.The umpires make their judgments through naked eye, so nothing against them. I have no grudge against them and happy to have made it through the tough times. I always thought if something goes wrong I can bowl leg spin and continue playing cricket”.

The outgoing cricketer further said that he is available for the World Cup if the selectors need him. “I want to play some more Twenty20 cricket. I made a lot of friends through cricket and sometimes my team-mates said I talk too much with opposition players” Murali concluded his farewell speech.

Victorious Sri Lankan captain Kumar Sangakkara said “From the start, winning the Test was the aim that would have been the perfect send-off for Murali too. I am very pleased that he got to 800 and all the best to him. Lasith Malinga was truly the Man of the Match, the way he bowled turned things around and made things easy for Murali and the rest. Malinga’s stand with Rangana Herath made a big difference. We must appreciate the grounds men under Jayananda Warnaweera for his efforts. On another ground, this match may not have been possible after all the rain.”

Indian captain Mahendra Singh Dhoni congratulated Murali and said it was a great moment for Murali. “We all knew he will come up with a great show being the great bowler he is, but that did not put us under pressure. Glad that he reached the magical figure of 800” he further added.

At the end Commentator Tony Greig said that Murali will always be remembered fondly for what he gifted the world of cricket and especially for those eyes and smiles of his.

President Rajapaksa is seen here sharing the joy with Murali and his family members at the memorable occasion. Minister of Sports C.B.Rathnayake, officials of the Sri Lanka Cricket Board, players of the both teams and Murali’s family members were present at the occasion. 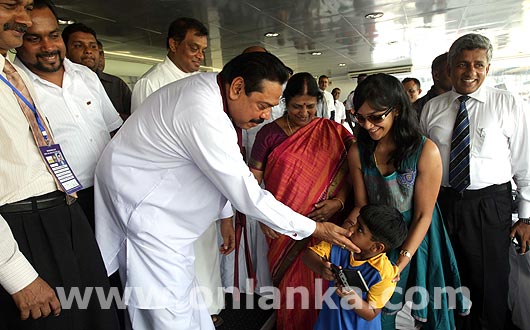