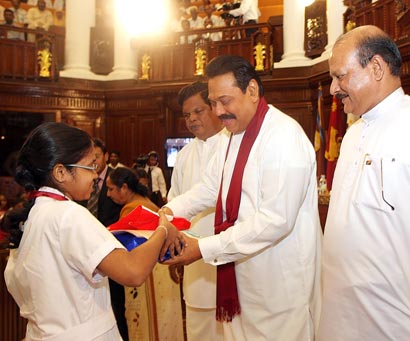 The government of Sri Lanka recognized over 134 students who performed outstandingly at the highly competitive national exam- G.C.E. Ordinary Level examination in December 2010. These young talents, the country’s best students who scored highest marks received their medals, certificates and gift packs including a pass book with a deposit of Rs 5,000 from President Mahinda Rajapaksa at the Presidential Secretariat on 08 April 2011.

The Minister emphasised that 62 percent of students passed mathematics last year compared to 42 percent recorded in 2006 due to the Government’s immense focus on the improvement of education sector. Under the guidance of President Rajapaksa, government declared year 2009 as the year of English and Information Technology and launched a number of programs to improve English knowledge among the school students. It has shown some progress which reflects from results that over 47 percent of students passed English subject last year as against 36 percent recorded in 2006, Minister Gunawardena further added.

Mauri Yashoda Vithanage who became all island first thanked President Rajapaksa for recognizing and encouraging them to ascend greater heights in the field of education. Mauri Yashoda further noted that the students are blessed with a Head of State who focus on the improvement of the education sector in the country.

Pictured here are the first in the island Mauri Yashoda Vithanage of Visakha Vidyalaya in Colombo, the second, M.R. Mohamed of Maliyadewa Vidyalaya in Kurunegala and third best D.Thathsarani Amaya of Eheliyagoda Central College receiving their awards from the President. 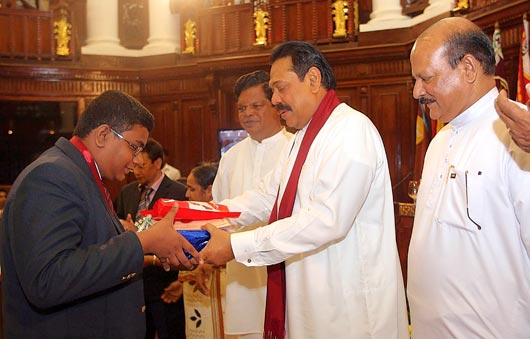 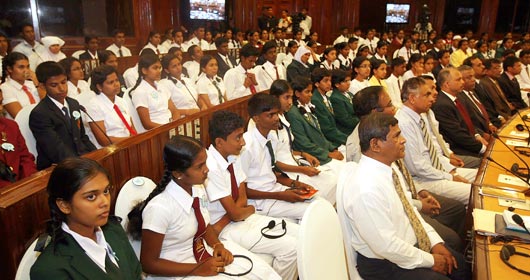