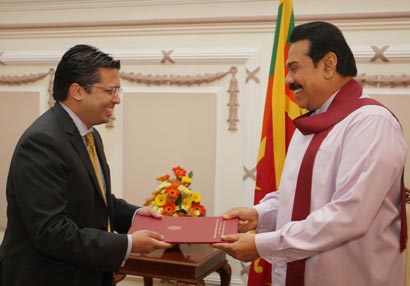 President Mahinda Rajapaksa handed over credentials to the newly appointed Sri Lankan High Commissioner- designate to the United Kingdom, Dr Chris Nonis, recently at Temple Trees. According to the reliable sources of the Sri Lanka High Commission in London, Dr Nonis will assume duties this week, on 01 September.

This high profile position was vacant for many months since the former High Commissioner Nihal Jayasinghe left the office on 31 December 2010 after finishing his tenure. Since then Deputy High Commissioner P.M.Amza who is a career diplomat appointed as the Acting High Commissioner to carry out the diplomatic duties and build up bilateral relations in London.

A leading Doctor Chris Nonis who is holding many high positions in private organizations is not a stranger to the UK. He studied in London and qualified with BSc. First Class Honours from Imperial College of Science, Technology and Medicine. He continued his MBBS at Royal Free Hospital, University of London and MRCP at Royal College of Physicians, UK. Dr Nonis completed his electives at Harvard Medical School, Boston, USA and Postgraduate at Addenbrooke’s Cambridge, Brompton & Hammersmith. He has a close rapport with British political hierarchies, law makers and leading business barons in the UK for many years.

Dr Nonis, the current Chairman of the Mackwoods PLC which was established in 1841, the world famous leading Sri Lankan tea exporter that continues the tradition of excellence in Ceylon tea internationally. He was accorded the unique privilege of presenting the Mackwoods ‘Queens Golden Jubilee Blend’ at Buckingham Palace few years ago. This connoisseur’s blend, which carried the official Golden Jubilee Logo, was specially created to commemorate the Golden Jubilee of Her Majesty Queen Elizabeth II. And also the Mackwoods Tea marquees have represented Sri Lanka at many prestigious events, exhibitions, celebrations and auctions including the World Tea Party for many years.

Prior to his departure Dr Nonis joined together with John Rankin, British High Commissioner to Sri Lanka to open an ICT and English Literacy Centre for plantation youth, one of their charitable projects funded by Mackwoods.