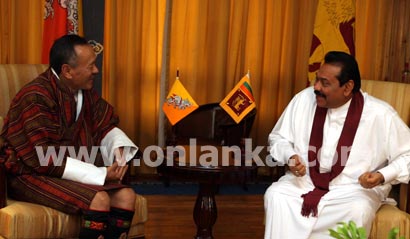 President Mahinda Rajapaksa who is currently in Bhutan to attend 16th SAARC Summit has held bilateral talks with Bhutan Prime Minister Mr.Jigmi Y.Thinley at the Sri Lanka House in the SAARC Village. The Prime Minister conveyed on behalf of His Majesty the King and the people of Bhutan a warm welcome to President Rajapaksa and the Sri Lankan delegation on their visit to Bhutan. Foreign Minister Prof.G.L.Peiris, Secretary to the President Lalith Weeratunga, Foreign Secretary Romesh Jayasinghe, President’s Co-ordinating Secretary Sajin Vas Gunawardena MP, Namal Rajapaksa MP and Sri Lanka High Commissioner to India, Prasad Kariyawasam were also present during the meeting.

Yesterday at the Paro International airport President Rajapaksa was warmly welcomed by the Premier of Bhutan. Later he was accorded a guard of honour and conducted to the saluting podium by the officials. Thousands of school children had gathered by the road sides waving Sri Lankan and Bhutan flags and saluting President Rajapaksa and the Sri Lankan delegation when they left for Thimphu in a ceremonial motorcade.

Eight state leaders of India, Pakistan, Sri Lanka, Bangladesh, Nepal, Maldives, Bhutan and Afghanistan participate at the Summit which will be held tomorrow and day after. SAARC foreign ministers’ meeting will commence at the conference hall in Thimphu this evening. Number of one to one meetings with SAARC leaders and Robert O Blake, US Assistant Secretary in charge of South and Central Asia are to take place at Sri Lanka House during the summit.

The Sri Lankan delegation including President Rajapaksa and the First Lady Shiranthi Rajapaksa also worshiped the ancient Buddhist sacred places in Bhutan and visited the Folk Heritage Museum in Thimphu. 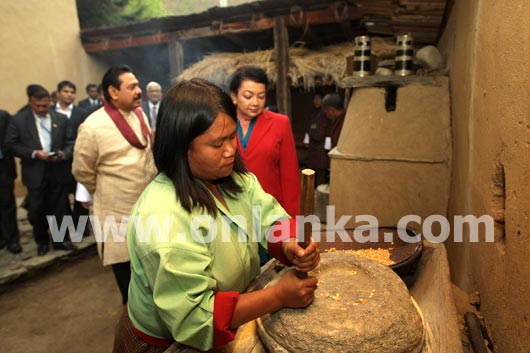 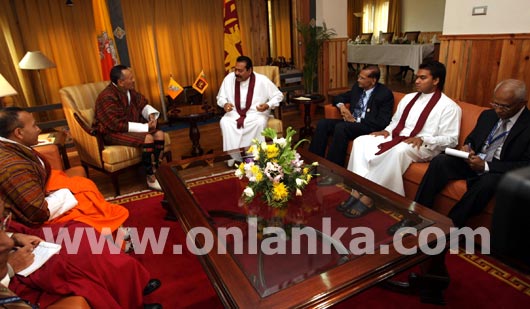