President Rajapaksa Holds Talks with the King of Jordan 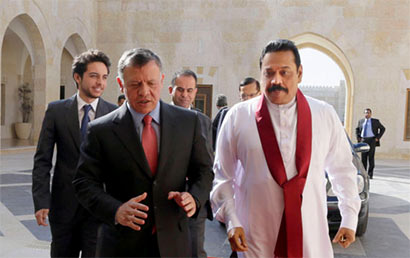 Following a warm welcome for President Rajapaksa, the two leaders held discussions on a number of topics relevant to both countries, including cooperation in defense-related activities and progress of the Joint Committee that was established after the signing of the Trade and Economic Cooperation Agreement in 2007.

President Rajapaksa also requested King Abdulla to consider a duty concession for the tea that Jordan imports from Sri Lanka. Sri Lanka is currently the largest supplier of tea to Jordan. Ceylon tea is one of Sri Lanka’s major exports to this Middle Eastern nation, contributing about 80 percent of Sri Lanka’s total exports to Jordan, which re-exports some of this tea to places such as Iraq and Palestine.

The two leaders strongly agreed to collaborate on multilateral issues, and President Rajapaksa invited King Abdulla to visit Sri Lanka, which he said he looks forward to doing in the near future.

Diplomatic relations between Sri Lanka and Jordan was established in 1965, and the resident mission of Sri Lanka in Amman began in 1996. The Embassy of Jordan in New Delhi is accredited to Sri Lanka.

Home » President Rajapaksa Holds Talks with the King of Jordan