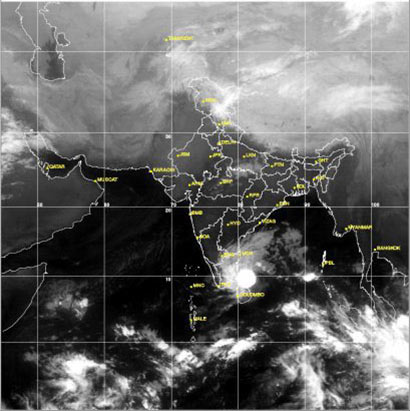 The deep depression still persists about 200km to the east of Trincomalee and is expected to move over or very closer to Jaffna peninsula today.

The Disaster Management Center (DMC) therefore advises those along coast from Jaffna to Mullaitivu not to remain within 100 meters of the coast.

The Met Department says that very strong winds about 100 kmph and very heavy rain (about 200mm) are expected over Northern part of the country and over Northern sea areas.

There will be frequent showers in the Northern province and over sea area off the coast extending from Mannar to Mullativu via Kankasanturai.

The seas off the coast extending from Mannar to Mullativu via Kankasanturai will be very rough and dangerous. The public living in the said coastal areas also should be more vigilant as the sea waves can be high about 3m.

Fairly strong North-easterly winds are expected to continue over other areas of the island too.

There will be showers or thundershowers at times in the North-central and Eastern provinces and Thundershowers will occur at several places in the Sabaragamuwa, Central and Uva provinces during the afternoon and night too.