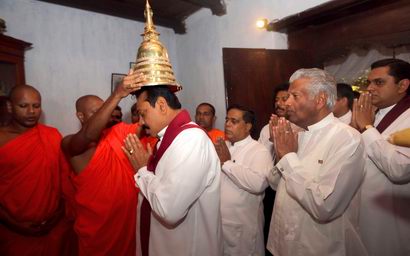 President Mahinda Rajapaksa paid homage to the Muthiyangana Rajamaha Vihara in Badulla this morning on 04th September. President met the Chief Incumbent of the Viharaya, Venerable Murutthadeniye Dhammarathana Nayaka Thero and took part in religious observances. Later Venerable Thero placed the sacred relic casket on President Rajapaksa’s head to bless him. Laying white sand at the Vihara Maha Maluwa of the temple was also held with the initiative of President Rajapaksa.