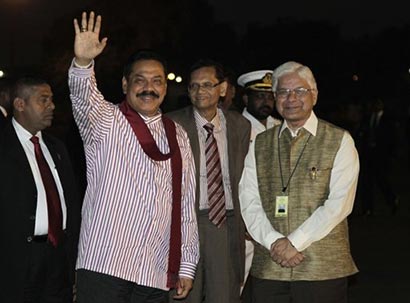 President Mahinda Rajapaksa left on a three day official visit to India Wednesday afternoon (19 September). The President and his entourage arrived at the Palam Air Force Base in New Delhi and they were warmly greeted by an Indian delegation at the Airport.  On arrival, India’s Minister of State for Parliamentary Affairs and Planning, Science and Technology Ashwani Kumar welcomed the President. Sri Lanka High Commissioner for India, Prasad Kariyawasam and High Commission officials were present at the Airport.

The President began the official visit to India following an invitation extended to him to lay the foundation stone for the International University of Buddhist Studies in the historically important city of Sanchi in Madya Pradesh on 21 Friday.  Dignitaries from Bhutan, Myanmar, Thailand, Japan, Cambodia, Mongolia and Nepal will participate for the foundation laying ceremony of the University.

Another purpose of the visit is to further strengthen bilateral relations between India and Sri Lanka. The President is also scheduled to have discussions with newly appointed Indian President and his Indian counterpart Pranab Mukherjee and Prime Minister Dr. Manmohan Singh on Thursday.

This will be the first meeting between the two parties after India voted in favor of a U.S. backed resolution on Sri Lanka at the United Nations Human Rights Council (UNHRC) Geneva sessions in March. However the visit came under a cloud after 184 Catholic pilgrims were attacked in the southern Indian state of Tamil Nadu couple of weeks ago. In response, the Government of Sri Lanka issued a travel advisory on Tamil Nadu which is still in force but insisted that their cooperation with the Indian central government would continue. Therefore the Presidential secretariat said that the talks will focus attention on recent incidents in Tamil Nadu and the ongoing fishing problems. The Indian Prime Minister is to host the visiting Sri Lankan President for a dinner Thursday night.

Meanwhile pro Tamil Tiger elements in Tamil Nadu infuriated by the vanquishing of Tiger terrorism have planned protests and black flag demonstrations against the President’s visit. Certain politicians and political parties strongly supportive to LTTE terrorism in Tamil Nadu are also demanding for the cancellation of the visit. An Indian has already self immolated in protest against President’s Indian visit.

The pro-LTTE Tamil party Marumalarchi Dravida Munnetra Kazhagam (MDMK) leader Vaiko and his convoy of buses carrying hundreds of supporters had left Tamil Nadu two days ago have been stopped by the police when they tried to enter the Madhya Pradesh this morning. LTTE ardent supporter Vaiko vowed to stage a black flag protest in Sanchi to show opposition to President’s visit. The Indian government said that it would not allow baseless protests by Vaiko and his followers in Sanchi.

Indian Janatha Party leader Dr. Subramanian Swami said that the arrival of President Mahinda Rajapaksa is an honor to India. Expressing his views to the media he said that protests by certain groups were baseless and Indians would welcome the Sri Lankan president as a hero. Dr. Swami further said that he hope that one day India’s highest honour, “Braratha Rathna” would be bestowed on the President Rajapaksa. India also suffered immensely due to LTTE terrorism. Defeating of the LTTE would be instrumental in bringing peace not only to Sri Lanka but also to the Asian region. Dr. Swami pointed out that Asia should be grateful to the Sri Lankan President who pioneered to bring peace to the region.

Sri Lankan High Commissioner in India Prasad Kariyawasam pointed out that the tour shows the warm relations and friendship between the two countries and the Asian region. He added that India and Sri Lanka have a historic relationship and no external forces could break such a strong relationship. 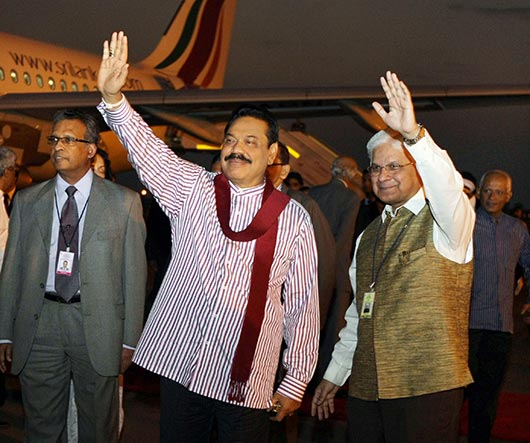