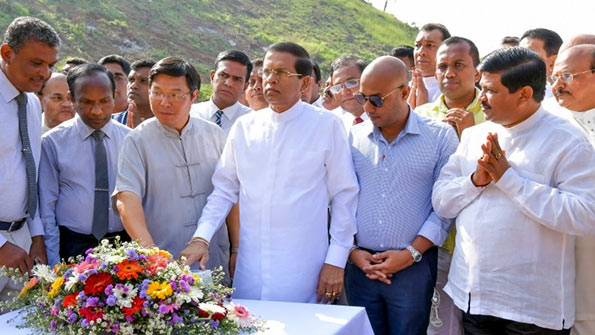 President Maithripala Sirisena declared January 11 as the happiest day of his life since he was able to provide a permanent solution to end a burning issue of the people of Rajarata.

The President noted that the Rajarata people were affected by an acute scarcity of water for decades as there was no proper irrigation system.

Apart from providing water for agriculture purposes, the project will provide drinking water to millions in the dry zone who are severely affected by health issues such as kidney disease. The project will also add 25 megawatts to the national grid by the power house attached to the main dam of Moragahakanda.

“Today is the happiest day of my life. But someone may ask me whether the day I became the President was not the happiest day. But when I became the President, I felt a sence of duty rather than feeling happy” he said. Addressing the large gathering ,the President noted that the water filling ceremony will mark a joint leap in the irrigation field of the country. Moragahakanda is not an isolated project as it will be followed by several other irrigation, hydropower projects such as Kaluganga, Upper Elahera and a few others.

“These projects will make a significant contribution to the country’s economy while blooming fresh hops in the hearts of the Rajarata people, who were stricken by the water scarcity for decades,” the President added. Speaking on the Moragahakanda – Kaluganga project ,the President said that even though he commenced the project on January 25, 2007 as the then Mahaweli Development Minister, former President Mahinda Rajapaksa did not give any support or assistance to carry out the project. He added that he made an untiring effort to seek funds , but was not allocated even a cent for the project. As a result of that , the project was stagnating for five years. Even after five years of laying the foundation, it could not be started. It has been scheduled to release water for irrigation in 2012 – 2013 if the project went ahead as planned.

The President pointed out that Sri Lanka has inherited a sound irrigation system and a unique hydro culture, which is not second to any in the world. As a result of this sound technological methods of our ancestors in the field of irrigation, an ancient sluice was discovered by a team of Canadian engineers who were engaged in constructing the sluice of the present Maduruoya reservoir. The ancient sluice gate was at the very place where the new sluice gate was intended to be constructed at the Maduruoya reservoir.

The President while thanking to the people who sacrificed their lands for the project said that they have made a unique contribution to the country and to strengthen country’s economy. He added that the entire project will add a value amounting Rs 200,000 million to the national economy. It will be a tremendous boost for the government’s effort to obtain sustainability in various sectors, including the agriculture sector.

The President speaking on the present weather situation said that the government was s duty bound to provide rice.

Sometimes rice will have to be imported to meet the demand. But it is regrettable that certain narrow minded politicians are leveling allegations on the government’s measure to protect , both farmer and consumer. The President added that a subcommittee appointed to look into the consequences of the drought, has recommended to import rice. Accordingly, the imported rice will be available in market place in the next few weeks. “The government has focused attention on providing relief to the people, who are badly affected by the drought. It is a six month program. Besides, a one year program will launched to face the drought strategically,” he noted.