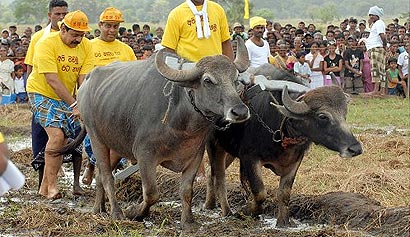 President Mahinda Rajapaksa yesterday said the Government has performed an outstanding service to uplift the status of the farmer community in Sri Lanka. He stated that the people should be prepared to make the best use of country’s lands to foster future development.

He added that the service carried out by the Government for the development of agriculture sector will ever be remembered by the farmers in the country though short lived in the minds of politicians.

President Mahinda Rajapaksa was speaking at the launching of the Farmer Week and the opening of agriculture exhibition at the Agricultural technological garden in Bata Ata, Hambantota yesterday.

A sales outlet at the garden premises was also opened by the President.

He said the Government has put in place a viable program under which the farmers will be strengthened to held the country’s economic development.

He added that the Government led by him liberated the country from the clutches of terrorism and a challenge is ahead of the country to meet the development targets.

The President said the people should cultivate food crops without expecting them from other countries. He said the Government took a number of measures to avert a possible food shortage in the country.

The President described the Api Wawamu – Rata Nagamu program (Let’s grow and build the nation) is the first step in the path to achieve self sufficiency in foods. The President added that the seed production sector needs more attention from the authorities. He said the Ministry should meet the seed requirement of the country.

Lack of funds is not an excuse to prevent these projects from being implemented. He was of the opinion that potato and onions need to be cultivated in the Southern region.

Sri Lanka is well on the road to becoming a self-sustained country through Agriculture. This park will not be only for tourists but for all Sri Lankans, to gain an idea of how Sri Lanka is proposing, he said.

Speaker Chamal Rajapaksa said Hambantota is a fast developing district. The Hambantota harbour is an example of this. It is evident that Sri Lanka’s future is bright, he said Agriculture Minister Mahinda Yapa Abeywardena said paddy cultivation is the key to Sri Lanka’s prosperity.

The President has provided strength to farmers, he said.

2 Responses to President tells young generation: Take up to agriculture