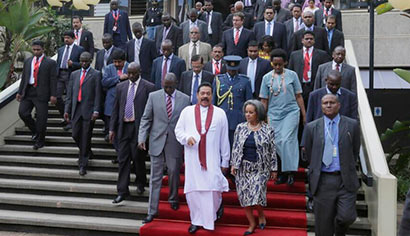 President Mahinda Rajapaksa this morning (13) visited the United Nations Office at Nairobi (UNON), the only U.N. headquarters in Africa.

Located in an area a short distance from Nairobi, the complex is situated on 146 acres comprising of more than 80 buildings that house more than 50 U.N. organizations with a total staff exceeding 3,500.

During the meeting, UNON Director General Mrs. Sahle-Work Zewde briefed President Rajapaksa on how the headquarters was established and the scope of its work in Africa.

The Executive Director of the United Nations Environment Programme (UNEP) Mr. Achim Steiner also briefed the President and commended Sri Lanka on its work in the area of sustainable development.

Mr. Steiner also applauded Sri Lanka for its interest in working with the private sector to find financing for sustainable development initiatives and the country’s work towards developing a green economy.

“We look forward to many more years of collaboration,” Mr. Steiner told the President.

The Deputy Executive Director of UN-Habitat Ms. Aisa Kacyira thanked the Sri Lankan Government for being supportive of the organization’s work and noted the good relationship they share, particularly in the implementation of projects related to post-disaster recovery.

President Rajapaksa recalled that several of the UN-Habitat projects in Sri Lanka have been completed successfully, particularly in the northern parts of the country.

Following the meeting, President Rajapaksa planted and watered a sapling of the African Rubber Tree on the UNON premises. It has been a tradition for heads of state to plant a tree on their visits to UNON. Before leaving the compound, the President, on behalf of Sri Lanka, gifted a painting of the Kandy Perahera (annual Buddhist pageant in Sri Lanka) that would be hung on the UNON premises.