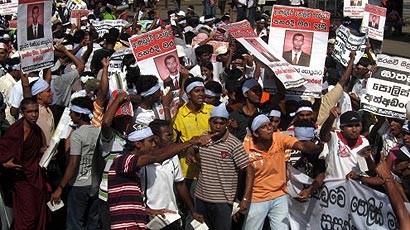 A Presidential Commission has been appointed to inquire into the details that led to the death of Susantha Anura Bandara, a student of the Ruhuna University, states the Secretary to the Commission Edmund Jayasuriya.

The Commission is headed by Supreme Court judge D.J. de S. Balapatabendi. It will probe into the incidents that occurred in the Ruhuna University on or around July 22, 2010 that culminated in the death of student Susantha Anura Bandara.

It will also attempt to identify who was responsible either directly or indirectly, to the student’s death. It will also find out whether the police or other relevant authorities had taken the necessary measures to seek legal steps regarding the incident.

The Presidential Commission requests the public to provide evidence if any on the incident to the commission Secretary by September 3, 2010.

If any individual or organization wishes to provide evidence on the above incidents, they are requested to submit in writing or call the Commission secretary on phone number 011 2669054 to set up an appointment, states the secretary.