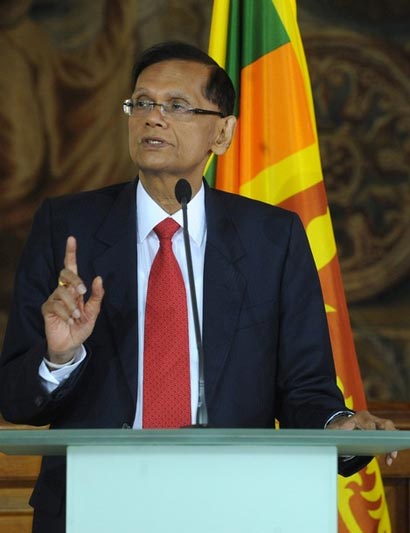 Sri Lanka, having made remarkable accomplishments in the post-conflict situation within two years, is entitled to the space freely and spontaneously to continue this momentum and complete the reconciliation process, Minister of External Affairs Professor G L Peiris said in London last week.

He was addressing an influential group of British legislators, diplomats, bankers, political analysts and academics on current developments in Sri Lanka and the role that could be played by policy makers in Britain. The event, which took place at the prestigious Savile Club in Mayfair, London, an established venue for conversations among well-known literary and political figures, was organized by Deputy Chairman of the Royal Commonwealth Society in London Dr Chris Nonis.

The Minister explained to his audience the multi-faceted challenges which Sri Lanka confronted at the termination of the conflict and the structured, sequenced approach the government adopted to the resolution of these complex issues.

He dealt in detail with the progress that had been achieved with regard to the resettlement of internally displaced persons, the rehabilitation of ex-combatants, the daunting challenges of economic revival and resuscitation of the electoral process and the continuing engagement with Tamil political parties in Sri Lanka as well as the diaspora.

Prof Peiris said that the most striking feature of the Government’s approach is the rejection of triumphalism and its resolve to look upon the termination of the conflict as an unique opportunity, presenting itself after several decades, to address in earnest the tasks of rehabilitation and reintegration.

The Minister went on to give his audience a number of concrete instances of achievements in respect of reconciliation. He referred to ex-combatants, with active encouragement from the government, being successful at the GCE (Advanced Level) Examination and in some instances, securing places at university.

He spoke of the record of the Bank of Ceylon in making substantial volumes of capital available by way of loan to support agricultural activity and livestock development in the Northern Province of Sri Lanka and the economic upliftment and the generation of large numbers of jobs which had been made possible because of this.

He described Sri Lanka’s signal achievements in the fields of education, gender equality, child and maternal health and the environment.

A vigorous question and answer session, which indicated a deep interest in Sri Lankan issues, followed the Minister’s address.

Among senior bankers present were Robert Farago of Schroders Banks, Michael Jefferson of Nomura Bank and Prabhakar Kaza of HSBC.