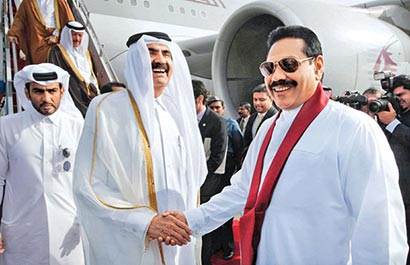 The Emir arrived in Sri Lanka yesterday on a two-day state visit on an invitation by President Mahinda Rajapaksa. President Rajapaksa warmly welcomed the Emir of Qatar and his delegation at the Presidential Secretariat. Subsequently, bilateral discussions were held between the leaders.

Minister Khaled bin Mohamed Al-Attiyah signed another MoU with Ministers Bandula Gunawardena and S B Dissanayake regarding research and development in the education and higher education sectors.

Industry and Commerce Minister Rishad Bathiudeen and Economic and Finance Minister of State of Qatar Yousef Hussain signed an MoU for Economic, Commerce and Technological Co-operation.

Culture and the Arts Minister T B Ekanayake together with State of Qatar Foreign Minister Khaled Bin Mohamed Al-Attiyah signed an MoU for development and co-operation in the field of culture and arts.