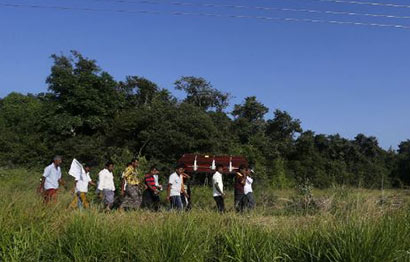 KONKETIYAWA, Sri Lanka A mystery kidney disease is killing Sri Lankan farmers. The first cases surfaced some two decades ago in the country’s North Central province, the main rice-producing area. Since then, the disease has killed up to an estimated 20,000 people on the Indian Ocean island nation. As researchers work to unravel the cause, and doctors continue to diagnose new patients, here are a few questions and answers about the illness.

Q: What’s the cause of the disease?

A: A World Health Organization study pointed to cadmium, pesticides and other factors, such as arsenic, as possible causes, but there was no clear link to any specific source. Water came back clean, though it has not been ruled out, and many suspect it is connected. Tobacco and certain vegetables, such as lotus root, were found to contain elevated levels of cadmium and lead.

Q: Who’s sick and how does the disease progress?

A: An estimated 70,000 to 400,000 people are believed to be affected. Kidney disease is typically caused by diabetes or hypertension, but not in Sri Lanka, where people in their 30s and 40s are stricken by the mystery version. The so-called chronic kidney disease of unknown etiology, or CKDu, acts like a toxin, destroying the tissue and causing the kidneys to shrink. Once the disease reaches the end stage, the only way to survive is by undergoing regular dialysis or getting a transplant. Often, several members of one family fall ill, and men are more severely sickened than women.

Q: Do agrochemicals play a role?

A: Sri Lanka is among the world’s top fertilizer-using countries, and some question whether heavy metals could be leaching into the soil and groundwater, though the government says regularly tested samples are within permitted limits. Last year, one scientist hypothesized that the popular weed killer glyphosate may be to blame. He suggested that the chemical, first introduced in Monsanto’s Roundup, forms a bond with heavy metals that persists in food and drinking water until reaching the kidneys, slowly destroying them. This has not been proven, and Monsanto denies the allegations, but Sri Lanka has officially banned the herbicide — though it’s still being sold.

Q: How is Sri Lanka coping with the problem?

A: The onslaught of patients has left Sri Lanka struggling to care for them. There are only 183 dialysis machines nationwide, forcing many to get treatment twice a week — or less — instead of the recommended three times. There’s also a shortage of trained specialists, with only six transplant surgeons and 10 nephrologists at public hospitals in the country. There is no national transplant program that uses cadaver kidneys, leaving desperate patients to rely on relatives or altruistic donors. Since many die at home, their deaths are often not recorded as a result of kidney disease, masking the scope of the problem.