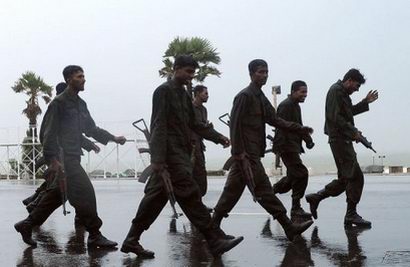 COLOMBO (AFP) – Heavy rains forced Sri Lanka to postpone ceremonies on Tuesday marking the defeat of the Tamil Tiger rebels one year ago and to remember soldiers who died in the fighting.

“The government has decided to postpone the war heroes’ commemoration ceremony which was due to be held at the War Heroes’ Monument at the parliament grounds,” the defence ministry said.

The disaster management centre said nearly 400,000 people had had their homes flooded due to torrential rains in the past three days while at least 11 people were reported killed due to flash floods and mudslips.

The defence ministry said a military parade due on Thursday to celebrate the first anniversary of its crushing of the separatist Liberation Tigers of Tamil Eelam (LTTE) had also been put off indefinitely.

Sri Lanka declared victory after the killing of LTTE leader Velupillai Prabhakaran and his top commanders on May 18 last year, ending 37 years of violence which claimed more than 100,000 lives.

The next day, the government showed Prabhakaran’s body on television with a deep cut across his forehead. Since then, there have been no attacks blamed on Tamil Tigers.

However Tamils living abroad have set up a new group called the Global Tamil Forum, which says it will lead a non-violent campaign for an independent homeland for minority Tamils in Sri Lanka.

The government in Sri Lanka has accused the forum of being a front for the Tigers and has expressed fears that Tiger remnants may try to regroup and rearm with the support of Tamils living abroad.

The Tamil Forum said it was observing Tuesday across the world as a day of remembrance of Tiger cadres and civilians killed in the final phase of fighting.

The United Nations has said some 7,000 civilians were killed during the final battles and Colombo is under increased international pressure to face a war crimes investigation.