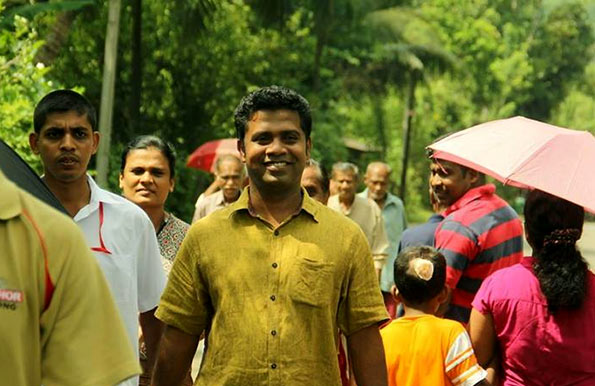 JVP MP Dr. Nalinda Jayatissa says that for true reconciliation to take place, the minorities should be made to feel that they are also given the opportunity to engage in the decision making process and activities related to the country.

“This is the way to creating a peaceful country where everyone are made to feel included and no one is left out,” he said in an interview with The Sunday Leader.

Speaking further he said that the government needs to follow a moderate approach in dealing with the accountability and reconciliation issue and should not move to either extreme.

According to Dr. Jayatissa the previous regime was totally opposed to the intervention of the international community while this government is on the other extreme. He noted that the government has to be genuinely committed toward reconciliation and they should genuinely be committed to safeguarding the rights of all citizens of the country.

Following are excerpts of the interview:

Q:  At a time when the UN High Commissioner for Human Rights is visiting the country. What is the progress made so far in implementing the UN resolution on Sri Lanka?

A:  It is irrelevant who visits the country, but the point is that the government of Sri Lanka is committed to safeguard the rights of its citizens. Due to the fact that the human rights violations took place in the country during the Rajapaksa regime, the US and other countries were able to interfere in the affairs of our country on the pretext of human rights. In a country that had to undergo war for nearly 30 years, the government is expected to take the human rights issues seriously and address them. However the Rajapaksa regime did not care about the people and gave room for the thugs to rule the country. This put the country on a bad footing. This paved the way for certain countries to try to dominate and manipulate us. Therefore it is the responsibility of the government to recognise these dangers and act sensibly.

On January eighth 2015, the people brought about a change, but we do not see the new government following a balanced foreign policy either. The Rajapaksa regime followed one extreme and this new Maithri -Ranil government is on the other extreme. Both these approaches are wrong and detrimental to the country. Our stand is that a middle path should be followed and we have not seen that from either the previous regime, not the current one.

Q: What is your opinion on the decision to sing the national anthem in both Sinhala and Tamil?

However my point is that singing the national anthem in a language that is not familiar to one, there could never be that sense of national feeling. The fault in our education system has made people of different ethnic groups confined to their own respective languages. But in many other countries, the education system is designed in such a manner that while the mother tongue is taught, children are also made to learn other languages in the country. It is due to this inability to communicate or understand each other, that the two main races in this country has alienated themselves from each other and created this animosity against each other. Therefore singing the national anthem in either Sinhala or Tamil should be something that is decided by the people and should not be seen as something extraordinary. The 1948 constitution also has provision for the national anthem to be sung in Tamil. However this should not be used to create racial disharmony or tension.

Q:  There are allegations against the current government that the promise to bring to book people of the previous regime accused of fraud and corruption, now seems like an endeavor of political revenge. What is your view?

A: Although the present government promised to take action against those corrupt politicians, the process has not been satisfactory. Although the FCID has completed investigations on 35 of the complaints they have received, and sent the files to the Attorney Generals department, legal procedures have only been initiated on five of these cases. Some of the crooks are in the government and they are being safeguarded. This inability of the government has created a situation and paved the way for these rogues to also cover up their faults.

This government failed to deliver on the promises they made to the people and it seems they have gambled with the mandate of the people. Now they have arrested Yoshitha Rajapaksa, but this is something they should have done earlier. Now the Rajapaksa’s are shouting that this is political revenge. However they must be made to explain how they obtained 234 million to invest in CSN. Money laundering was a big business in the country and CSN was another way of doing that. Rajapaksa should not be crying because his son went to prison, but he should be crying for using his sons for this sort of crimes for monitory and political gain.

They should also look into how he received all the positions in the Navy when Yoshitha did not even pass his O/L.

Q:  When a majority of the Tamil population lives outside of the North or East, do you think that asking for separate administrative powers by the Tamils is justified?

A. Powers is not something that the ordinary people are asking for. This is something that the politicians want in order to hold onto power. The TNA had control of the Northern provincial council for the past 4 years and so far what have they done to help the ordinary Tamil people in the North? Now they are trying to ask for federal power to hide their inefficiencies and cover up their failures. This is nothing to do with the people.

Q:  The Tamil parties feel that the Constitution should ensure power devolution and this is the only way reconciliation can take place. What is your take on this?

A:  No matter what powers are given to the TNA leadership, reconciliation can only be achieved through resolving the issues of the Tamil people. The rule of law in those areas should also be implemented and peace should be guaranteed. This is the only way that reconciliation can take place and not through giving power to the Tamil politicians.

Q: In your view what is the best way to ensure peace and reconciliation among the Tamils and the Sinhalese in the country?

A:  Firstly a people friendly government should be established where the best interest of the people will be ensured irrespective of their race. They should ensure that all people are treated fairly and equally and all people of the country are given the same rights. They should be made to feel that they are stakeholders in the development and progress of the country and this progress should be enjoyed by the whole country and not just a few privileged people. National pride and belonging should be inculcated in all people and they should not be made to feel alienated. Everyone should have equal status and this is the best way to ensure national unity. All should be citizens of Sri Lanka.

Q:  The JVP has been asking for a new Constitution, but now that a new constitution is being formulated, why are you against it?

A:  Our constitution is 38 years old and it has been amended 19 times already. Therefore it is high time that the constitution is drafted freshly, to suit the current needs of the country. The new constitution should be one that addressed all the needs of the people of this country and one that is fair and acceptable to all. The 1972 and 78 constitution was drafted simply to safeguard the interests and economic intentions of the rulers.

Therefore we are of the view that the new constitution should be formulated for the benefit of the whole country and not just to suit a handful of the affluent. We feel that even the new government is trying to bring in the new constitution just to hide their inefficiencies and failures. This is what we are against.

Q:  The government has invited all to participate in formulating the new constitution. Will the JVP also contribute to this process and get involved on behalf of the people?

A:  This process is still at the discussion stage. The JVP forwarded their proposals recently and we asked that the constitution be formulated according to the provisions given. We do not want a system where the prime minister gains power where he can control and dominate the cabinet. The proposal we tendered was that through a system where all ministers get equal rights, a draft proposal of the constitution be submitted to parliament and through a debate in parliament and the approval of the cabinet, it should be put to a referendum. This is what we proposed.