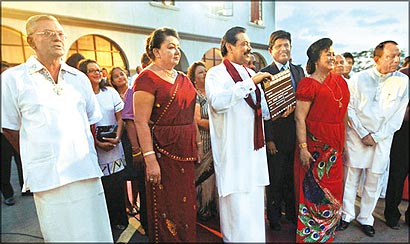 President Mahinda Rajapaksa who declared opened the country’s first ever fully-equipped National Tele-Cinema Park at Ranmihithenna in Tissamaharama yesterday identified the facility as the biggest investment a Government could make on behalf of its local cinema.

The Mahinda Rajapaksa Tele-Cinema Park built according to a concept by him is located in a sprawling 235 acres of land with a cost of Rs 600 million for the first phase and the total cost is expected to exceed Rs two billion. The President after declaring open the facility told the crowd who had gathered to witness the historic occasion (which included the country’s cream of Film-Tele industry fraternity), that the golden era which was lost to the local cinema would be back.

He added that the time where Sri Lankan film makers would compete with the best in the global arena would be in the not too distant future. Also the time in which overseas Tele/Film makers dictated terms on the local audience would soon be over, he added.

The President was of the opinion that it was not the talent which the local film makers lacked but the facilities to compete with the very best in the world and added that the likes of Ranmihithenna would empower them to reach greater heights.

The facility which includes the infrastructure film producers need provides the television and cinema artistes of the country an opportunity to produce films and tele-drams under one roof at a low production cost. It also provides the necessary natural scenery as it is located close to natural attractions in the area such as the Yala National Park, the Coastal belt, natural landscapes with magnificent scenery and vistas and a water reservoir of 40 acres.

The producers also could reach the mountains of the central hills within the short span of two hours. Also there are various production sets in line with producers requirements including mock locations of cities such as Colombo, Kandy, Anuradhapura and Galle.

It has a fully equipped studio, accommodation, libraries, educational facilities, swimming pool, restaurants etc. This enables artistes to complete their creations of international standards under one roof but with low production cost. The Village is funded with the state revenue tax collected from foreign tele-dramas. The opening ceremony was followed by a colourful ceremony including a street opera with the participation of 450 artistes.