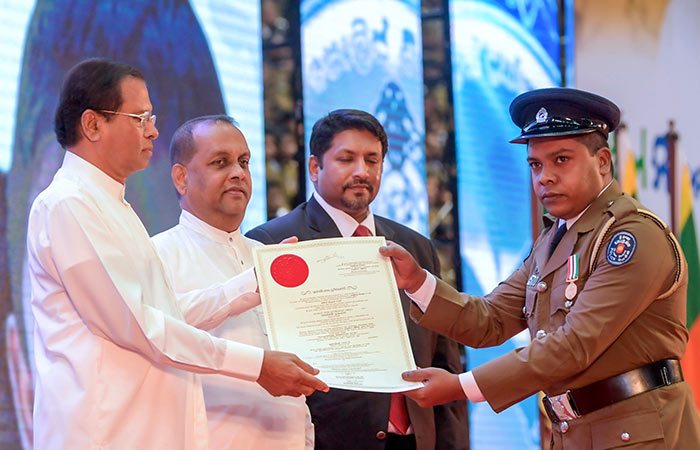 President Maithripala Sirisena says to save the nation from brutal drug smugglers a war must be conducted in a similar manner as the war against the ruthless terrorism that lasted 30 years.

President Sirisena requested members of Tri-forces, police and Civil Defence Department to come forward with their talents, bravery and as the leading personality as shown earlier, to fulfill this humane task and said that he is ready to provide leadership in this regard.

He made these remarks addressing the ‘Janapathi Prashansa’ awards ceremony to felicitate Police officers who played a major role in making the concept of ‘Mathin Nidahas Ratak’, a success yesterday (28) at the Sugathadasa Indoor Stadium.

The President, expressing his views further said that he will end the era which the drug smugglers and persons who engaged in different illegal activities, took actions to transfer the Officer-In-Charge (OIC) of the Police Stations.

The President said that when giving transfers to the police officers, including the annual transfers, policy transfers and other transfers, the reason for the transfer should be included in the transfer note itself and he will give the order in this regard.

President Sirisena said that the above mention step will be taken to create an environment for all the police officers to fulfill their respective duties with honesty at all times. He also said that as the President and the Minister in charge of the Police he will be committed to protect the officers who perform their duties truthfully.

The President said that he will establish a special unit to create a system to inform him personally, if a police officer is transferred due to the knowledge of the racketeers and smugglers, or a personal harm or challenge occurred to them.

He also said that a new Cabinet paper will be submitted to the cabinet tomorrow regarding the establishment of a Rehabilitation Authority to rehabilitate persons who are drug addicted and said that steps will be taken to establish that Committee comprised of experts representing various fields, within the next few weeks.

The President emphasized the imperative need of all citizens including everybody from the Secretaries of the Ministries to the workers as well as clergy and the government servants to contribute to make this a drug-free country. The President also invited everyone to get involved in this national programme.

One thousand and seven Policemen were handed over certificates of appreciation by the President honouring their attempts to make Sri Lanka a drug-free country – a concept that was initiated in 2015. He also expressed appreciation to them for ensuring a free and a peaceful life for the citizens through their efforts to eradicate drugs, alcohol and organized crimes.

The President handed over the certificates in the occasion.

This is the first occasion such an award ceremony of this magnitude was conducted.

The Governors, Ministers, Ambassadors and distinguished guests including the three Commanders of the Armed Forces as well as the Inspector General of Police graced the occasion.