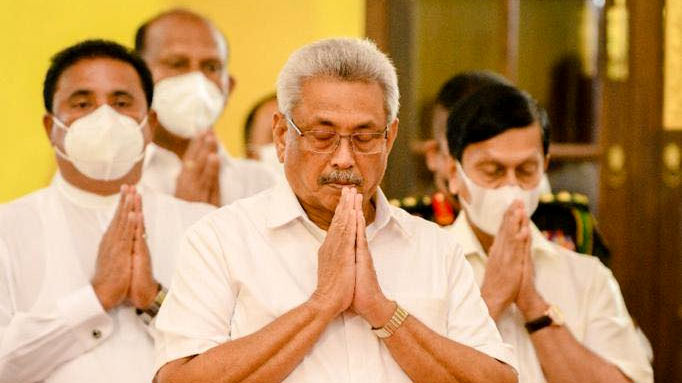 President Gotabaya Rajapaksa says that the government has assured through actions that Sri Lanka’s ancient Buddhist heritage sites are safeguarded and that it will continue to provide patronage to protect the country’s values, traditions and customs.

He made these observations while addressing the Maha Sangha during a ceremony held on Sunday to bestow him with the honorary title of “Sri Lankadheeshwara Padma Vibhushana” by the Kotte Sri Kalyani Samagri Dharma Maha Sangha Sabha.

“Before I became the President, we all knew how the condition of our Buddhist sites like Kuragala, Muhudu Maha Vihara and Deeghawapi was, how the monks who lived there were treated and the fate of the lands belonging to those temples. We all can be happy about the current state of those temples.”

“During my tenure, we have assured with action that our ancient Buddhist heritage sites are safeguarded,” he said.

The President said they were able to successfully control the pandemic that engulfed the world for two years. “However, even if some people insulted me because of the economic and social hardships the pandemic has caused to the people of this country, I have the strength to endure such insults with equanimity.”

“Also, those who insult me have not been able to do an iota of the service I have performed to the country in my lifetime,” he stressed.

He pointed out that the ‘Kroda Wagga’ in Dhammapada says that there is no person in this world who has received either only insults or only praise.

President Rajapaksa pledged to protect and nurture the Buddhist philosophy in this country. “We must always protect the Sinhala culture and heritage that has a history of thousands of years. Therefore, the government will continue to provide patronage to protect our values, traditions and customs.”

He said he will always uphold the right of all Sri Lankans to live in peace and harmony by preserving their religious identities and to live with dignity in association with the main culture of this country that persisted throughout the history.

“I am ready to embark on a new journey by overcoming the obstacles we have encountered so far, and to fulfill the aspirations of the people who elected me as President of this country.”

“I responsibly declare before this Most Venerable Sangha community that I am ready to take any tough or bold decisions that need to be taken in this regard,” he emphasized.