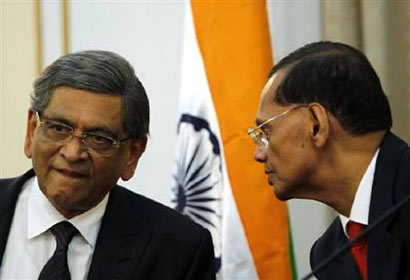 The UNHRC has concluded. 2 Resolutions have been passed both sponsored by US and backed by India. Many continue to ask what went wrong. Many wonder inspite of defeating a terrorist organization why the nation has been turned into and treated as a pariah state. Never has Sri Lanka had to suffer such humiliation despite being the only nation to have defeated terrorism. Our lessons are clear. We have failed to tackle the world and that failure lies at the doorstep of the Ministry of External Affairs tasked to make the world informed of Sri Lanka’s progress.

The resolution once again affords us an ideal occasion to ask where we went wrong and what we need to do to not make the same mistakes. A proper vision and strategy entails a need for the President to take stock of the outcome of the UNHRC. Opening up missions in every corner of the world and filling them with political appointees will not do any service for the nation as we have seen.

Our external affairs has been handed over to a person whose record of tackling foreign issues has little to show for itself given that he has held on to the portfolio inspite of deserting camp. Debacle after debacle is what has been a hallmark of an individual whose handling of this portfolio has given little or no assurance of security to the nation. Is this not why the President has to even appoint a monitor for that Ministry. Will he also have to appoint a monitor for the monitors!

The ceasefire agreement is the best example of how the present external affairs minister not only agreed but praised an agreement that gave a terrorist organization official territory in Sri Lanka in addition to the humiliations suffered by the military. The list of gullible officials who sacrificed the nation for their personal glory are many.

Personal affiliations to liberal theories and associated entities of secularism, devolution, federalism etc are a dangerous chemistry for someone tasked to maintain the unitary status of the nation. There are several other such public officials towing this line of thinking.

It is these personal weaknesses and affiliated thinking that ends up bartering the unitary nature of the country and has led to these very people championing agreements such as the 2002 ceasefire, ISGA, PTOMs, Equal Opportunities Act (that would have denied the place of Buddhism violating the Constitution)

It is ridiculous to think that the entire world is against Sri Lanka. Every negative must be approached with a positive counter agenda and what has the external affairs minister devised to counter these? We know that Tamil Nadu’s angst with Sri Lanka has a background there are other ground realities as well, we are aware that Sonia Gandhi prefers power to avenging her husband’s death – so many other dynamics are at play.

But what about the other states of India? Why has the ministry not taken any lengths to secure ties with these other states given that many of them have Buddhist populations? They could have together easily nullified the Tamil-Nadu Sonia alliance. By building relationships with these states some as powerful as Gujarat where India is likely to see their new pro-Hindu PM should have been explored as a strategy with a Buddhist desk opened in the ministry. Just because the minister is a “bayagulla” not wishing to give the place due to Buddhism simply because he prefers to keep company with only the English speaking elitist pro-West group it does not mean the entire country has to tow that line.

The Sinhalese Buddhist kings never faced the humiliations that our present leadership and entire country is having to face. Every citizen of Sri Lanka has to be given rights and freedoms but these are all within the provisions of the Constitution. Why has the external affairs ministry not circulated to all missions overseas that they must describe Sri Lanka as a nation belonging to all citizens but predominantly Buddhist because that aspect is clearly given in the constitution and no public official can decide to omit Article 9 because of his personal dislike to mention Buddhism. There appears to be several other heads of state in missions overseas who are not allowing the national anthem to be sung and dissuading foreign investors to invest in Sri Lanka. All these need to be seriously investigated and heads of these missions must be recalled.

The foreign ministry cannot be run as a one-man show where even competent personnel are shoved into the background and only the favored elite Colombians end up calling the shots. People who are in the service and competent must be given chances irrespective of favoritism. There are enough talented individuals in the external affairs ministry who are not getting the chance they deserve. It is unfair to sideline them and not use their talents.

There are unfortunately many in the ministry who prefer only Western appointments because they serve personal purposes. Nevertheless if the ministry is to function with the nations best interest at heart what the policy makers need to realize is that with China rising the invariably reality is Asian nations will rise with it. We see how India is “looking East” and India is tapping the Buddhist past and we question when we have a far greater right having preserved Buddhism, why we are not pursuing Buddhist diplomacy amongst the Asian nations majority of whom are Buddhists and rising. It is a great opportunity for Sri Lanka to initiate an International Conference on Buddhist Nations bringing all the Buddhist world together at a diplomatic level. These are all natural historical allies and these ties would keep Sri Lanka secure at all times.

At the same time we have to accept that our heads in the Missions have not regularly kept nations informed and engaged in the truth – have they explained and put into perspective how LTTE started, the Indian role as a foreign state sponsoring terror way back in the 1980s, have these missions been told about the Diaspora, their ties to the LTTE, the rackets they are involved in fleecing their own natives….do these missions keep updated statistics and use them? Where there is a will there is no limit to what could have been done to put the story straight given that we had all the facts in our favor but we did not use them.

These actions are all tantamount to betraying the brave deeds of our soldiers. Most of whom sacrificed their lives to save ours. The Ministry has to accept their folly in not taking up the challenge at a diplomatic level similar to the enthusiasm and commitment shown by the armed forces when they went to war with the LTTE in 2009. It is a pity that these laid back approaches has given the dividends that we are now left to feel sorry about.

We cannot be in mourning forever. The best way going forward is to reshape the Ministry with proper guidelines, suitable strategy and action plans that need consistent monitoring. Simply going round the world attending conferences, diplomatic events or delivering eloquent speeches has not given the nation any dividends. Every opportunity given on the international arena have been approached with the sole policy of appeasing the West and not wanting to defend the nation.

Revamping the ministry giving opportunity to those that can deliver is a good way to go forward. There are plenty of suitable individuals in the missions all they would need is the guidelines in order to function.

2 Responses to Revamp the Sri Lankan Ministry of External Affairs