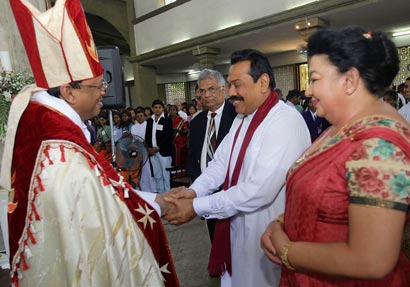 The Episcopal Ordination and Installation of Rt. Rev. Dhiloraj Ranjit Canagasabey as the 15th Bishop of Colombo at the Church of Sri Lanka took place this morning on 14 May at the Cathedral of Christ the Living Saviour in Bauddhaloka Mawatha, Colombo.

President Mahinda Rajapaksa accompanied by First Lady Shiranthi Rajapaksa participated at the consecration ceremony. Opposition Leader Ranil Wickremasinghe and Minister of Foreign Affairs Prof. G.L. Peiris were also present.The President, First lady and other dignitaries extended their warm congratulations to the newly elected Anglican Bishop at the event. Rev. Canagasabey succeeds Rev Duleep de Chickera, the 14th Bishop of Colombo. He was elected without contest by the Diocesan Council of the Diocese of Colombo at a special session held in March.

Rev Canagasabey had his education and formation under the Jesuits of the Roman Catholic Church at St Michael’s College, Batticaloa. Thereafter he obtained his twin tertiary degrees in Theology and later Divinity from the University of Serampore, India. He had his theological training at the Theological College of Lanka, Pilimatalawa, following which he was ordained a Deacon in 1983 and a Priest a year later.

He served in several parishes before appointment as Archdeacon of Nuwara Eliya in 1997. He was also Chaplain to St Thomas’ College, Bandarawela. The new Bishop is a fluent speaker in all three languages. Prior to entering the sacred ministry, he was in the hospitality industry and worked at the former Hotel Lanka Oberoi. He is married to Harshini and has a daughter Dhilukshini, and a son Dhiranjan.

The consecration was attended by the outgoing Bishop Rt. Rev. Duleep de Chickera, Rt. Rev. Paul Sharker as the representative of the Archbishop of Canterbury Most Rev. Dr. Rowan Williams, former Bishop of Colombo, Rt. Rev. Kenneth Fernando, senior clergy from Anglican and other National Christian Council churches, the Roman Catholic Church as well as local and overseas ecumenical partners, many local and foreign dignitaries, diocesan councillors and representatives of churches in the Dioceses of Colombo and Kurunegala also attended the service held in Sinhala, Tamil and English languages.

Buddhist and Hindu clergy along with other religious dignitaries of other communities were also present. 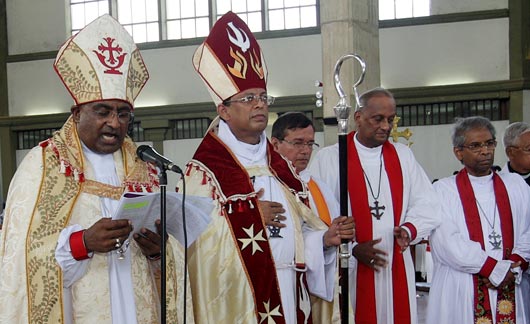