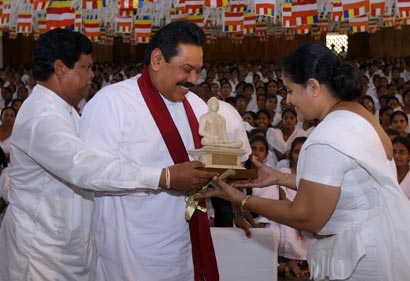 President Mahinda Rajapaksa participated in the sil campaigns organized in connection with the 2600th Sri Sambuddhathwa Jayanthi celebrations at the Ananda and Nalanda Colleges and Visakha Vidyalaya in Colombo on Friday 13 May. Many special religious programmes of Dhana, Seela and Bhavana including sil campaigns have been organised at all schools in the island to commemorate the 2600th Sambuddhathwa Jayanthi.

The 2600th Sri Sambuddhathwa Jayanthi special religious programmes have been held countrywide under the patronage of the President for the school children with the aim of building a virtuous generation who are to take the future of the country to adhere to the percepts.

To mark the occasion President Rajapaksa joined in a Sambuddhathwa Jayanthi programme of Ananda College Colombo. Alms, sil and meditation were among the many programmes organised. Later he participated as the Chief Guest in a Sambuddhathwa Jayanthi programme launched in Nalanda College Colombo. Finally, President Rajapaksa visited Visakha Vidyalaya and joined in offering midday alms giving (Dhana) to schoolchildren who participated in the sil campaign. Presentation of a Buddha statue to the Vishaka Vidyalaya has also taken place.

President Rajapaksa is seen here participating in the Seela Campaigns and other religious observances with the school children at leading Buddhist schools in Colombo, offering dana at the Visakha Vidyalaya and presenting a Buddha statue to Principal Mrs. Sandamali Aviruppola. Religious observances were conducted by Ven. Thrikunamalaye Ananda Thera and Ven. Galagama Dhammaransi Thera. 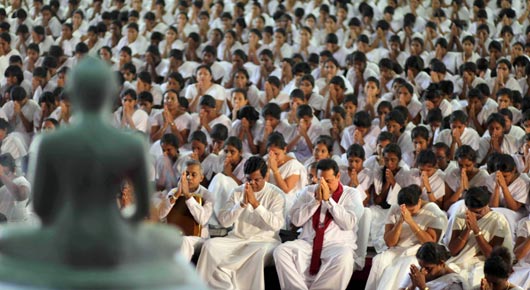 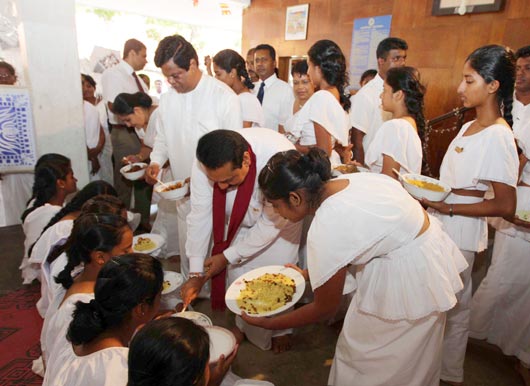