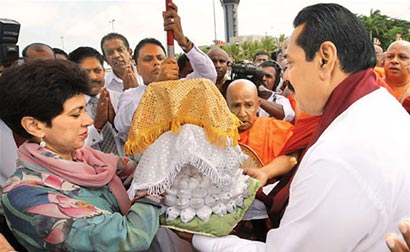 During the landmark State Visit of President Mahinda Rajapaksa to India in June 2010, it was decided that the 2600th year of the attainment of enlightenment of Prince Siddharatha as Gautama Buddha (Sambuddhatva Jayanthi) will be commemorated by India and Sri Lanka through joint activities. Following this agreement, President Rajapaksa personally requested the Prime Minister, Dr. Manmohan Singh, to afford Sri Lankan Buddhists an opportunity to pay homage to the sacred Kapilavastu Relics by allowing the Relics to be taken to Sri Lanka as a part of the commemoration of the 2600th year of the Sambuddhatva Jayanthi.

These Relics of the Gautama Buddha which are known to the world as the ‘Kapilavastu Relics’ are from a site in Bihar first discovered in 1898 which is believed to be the ancient City of Kapilavastu. This epoch making discovery was at a stupa site, Piprahwa. The relic casket discovered in 1898 bore the inscription “The shrine for relics of the Buddha, the August One, is that of the Sakyas, …”.

The first exposition of the sacred Relics of Kapilavastu outside India was in Sri Lanka in 1978. Subsequent expositions of the Relics took place in Mongolia in August 1993, in Singapore in July 1994, in South Korea in 1995 and in Thailand in 1996. Subsequently, taking into consideration the inestimable value and delicate nature of the Relics, the authorities in India entrusted with the care of the Relics decided that the sacred Kapilavastu Relics will henceforth remain as a venerable object at the National Museum of India in New Delhi and will not be taken outside India for public veneration.

However, the request made by President Rajapaksa in the 2600th year of the Sambuddhatva Jayanthi received special consideration at the highest level of the Government of India. Making an exception, the Government of India decided to lend the sacred Relics to Sri Lanka for public veneration, once again. The sacred Relics are thus being brought to Sri Lanka after three decades since their first exposition in 1978.

Announcing the decision of the Government of India during an official visit to Sri Lanka last year (2011), the Speaker of the Parliament of India (Lok Sabha) Srimati Meira Kumar stated that “this sacred expositions would have a calming and peaceful effect in the region and spread the word of non-violence”.

Authorities of both countries worked hard, with commitment and perseverance, to make this sacred exposition a reality by making substantial effort in terms of logistics, safety of the sacred Relics, facilities for devotees to pay homage, and other matters that a monumental event of this nature involves.

In view of the importance attached by both countries to this occasion, the sacred Relics will be brought to Sri Lanka in a special Indian Air Force aircraft by a delegation from India led by Indian Minister of Culture, Kumari Selja and the Director General of the National Museum of India. Prior to the departure of the Relics to Sri Lanka, the Sri Lankan Maha Sangha resident throughout India at several sites associated with the life of Gautama Buddha, will perform a special religious Ceremony and offer Buddha Pooja at the Indian Air Force Base in Delhi. High Commissioner Prasad Kariyawasam and the staff at the Sri Lanka High Commission in India will organize and attend this important event.

The sacred Relics will be received in Sri Lanka at a stately Ceremony led by President Mahinda Rajapaksa, with the participation of the Venerable Maha Sangha and other dignitaries.

This sacred event is yet another manifestation of the close fraternal ties that happily exist between India and Sri Lanka since time immemorial, especially from the days of Emperor Asoka whose son and daughter carried the message of Buddhism to Sri Lanka 2,301 years ago.
It is a matter of immense satisfaction that the noble initiative taken by President Rajapaksa has become a reality with the sacred Kapilavastu Relics of Gautama Buddha being brought to Sri Lanka for the nation to pay tribute, and in particular for Buddhists to pay homage, in continuation of the celebration of the enlightenment of Prince Siddhartha Gautama 2600 years ago in the land of Jambudvipa. 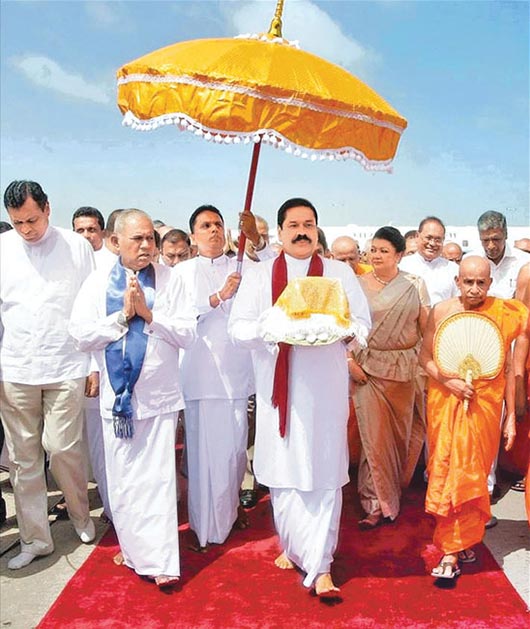