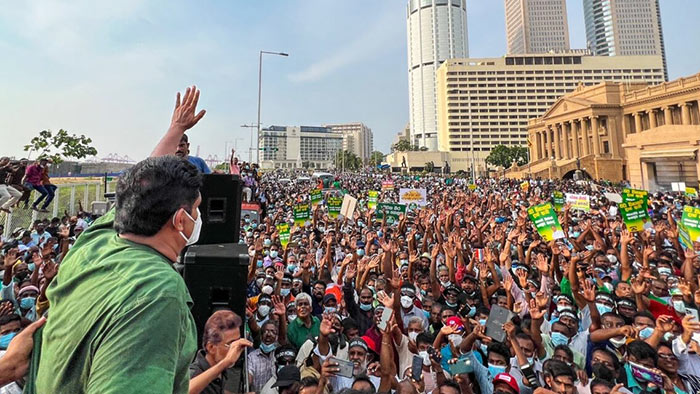 The SJB group won 54 seats, including seven National List slots, at the last general election. Since then, one NL member Diana Gamage has switched allegiance to President Gotabaya Rajapaksa.

The SJB leader said that if the SLPP was not prepared to face an early presidential election, it should hand over the government to the SJB.

The SJB declared that the SLPP had lost public faith after causing an unprecedented economic crisis.

Law enforcement authorities in the provinces blocked vehicles carrying SJB supporters to Colombo, but the SJB managed to assemble a sizeable group opposite the Presidential Secretariat.

Premadasa emphasised that his party would not cut political deals with the government under any circumstances. The SJB called the protest amidst speculation of a possible attempt to form a national government.

The Opposition Leader said that thousands of people had gathered in Colombo, regardless of police attempts to block them, as they wanted to send the Rajapaksa government home.

He claimed that three countries had promised to supply fuel to a government formed by SJB for a period of two years under concessionary terms.

Those who suffered at long queues to obtain essential items, medicine and food wanted to see the back of the present government, he said.

(Source: The Island – By Akitha Perera)