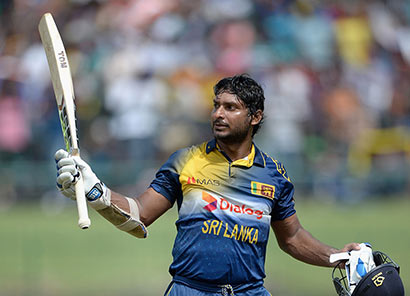 A masterful century from Kumar Sangakkara helped Sri Lanka wrap up the ODI series against England with a thumping 90-run victory in Pallekele.

Sangakkara, who had made half-centuries in the four previous matches, compiled the 20th century of an exceptional career as Sri Lanka reached 292 in their 50 overs. On a slightly two-paced pitch offering assistance to bowlers of all varieties and at a ground where no side had ever chased more than 240 to win an ODI, it was an overwhelming contribution.

If, as expected, Sangakkara retires from ODI cricket after the World Cup, this will have been his last limited-overs innings in international cricket on what might loosely be termed his home ground. If so, he left his supporters – and there are many – with vivid memories of a great player combining experience and prodigious natural ability for the benefit of his team.

The result means that, with one match to play in the series, Sri Lanka have an unassailable 4-2 lead. It also means that England have lost six of their last seven ODI series and nine of their last 12 ODIs. They have also been bowled out in eight of their last 11 ODI innings. Here they left eight-and-a-half overs unused.

Alastair Cook has endured several wretched days over the course of this year, but few can have been worse than this. Not only did he fail again with the bat – missing a straight ball that did not turn – but he dropped a simple and hugely costly chance in the field and saw England miss their overrate target yet again.

The dropped chance may well have been the turning point in the game. Sangakkara was on 41 at the time and, attempting to drive a Ravi Bopara delivery over the top, gifted a simple chance to mid-off. But Cook, with his mind scrambled and his focus elsewhere, was unable to cling on to a straightforward chance. Sangakkara punished the miss ferociously.

Cook has now scored one half-century in his last 21 ODI innings. It is 30 months and 45 innings since he reached 80 in an ODI. And to make his embarrassment all the more acute, the only ODI series England have won this year came in the Caribbean when Cook (and other 50-over players) were rested to provide opportunities for the shorter-format specialists ahead of the World T20. The last time England won an ODI series under Cook was in New Zealand at the start of 2013, meaning they have won one of the last nine ODI series under his captaincy.

That an England camp bursting with analysts and statisticians have ignored such figures is puzzling.

Increasingly, though, Cook’s ODI captaincy appears untenable. The reprieve of Sangakkara might prove to be the final straw. Cook has, of late, seemed to drop everything but himself.

The day had started well for England. Steven Finn and Chris Woakes delivered probing opening spells and conceded only 27 off the 10-over Powerplay. Mahela Jayawardene, promoted to open in place of the dropped Kusal Perera, was beaten by a hint of swing and hit a leading edge to mid-off.

But Sangakkara and Tillakaratne Dilshan added 153 in 30.3 overs for the second wicket. Initially cautious, they accumulated without risk and then accelerated with a class that took they match beyond England.

Having lost their way against England’s spinners in the previous match, they were notably more proactive in this game. Dilshan utilised the switch hit to score off the impressively tight James Tredwell, while Sangakkara disrupted Moeen’s lengths with his swift footwork and ability to rock on to the back foot and out away the short ball.

Sangakkara took 22 balls over his first 11 runs and 71 to reach his 50. But his next 50 took only 34 balls and, as he pulled and drove Chris Jordan for sixes, or skipped down the pitch to hit Mooen Ali over mid-on, England’s cricket became ever more ragged.

Jos Buttler missed two chances – one a desperately tough stumping, the other an error of judgement when he called for a catch that would have gone almost straight to James Taylor – while England’s bowlers donated another eight runs in wides. Their tally in the six match series to date is 64.

Though Sangakkara fell with five-and-a-half overs to go, the platform he had built allowed Sri Lanka’s lower-order to attack with freedom. With England’s seamers persisting on pitching short, Sri Lanka’s batsmen plundered 67 from the final seven overs.

England never threatened in reply. Though Moeen caressed two sixes and a four in one Dilshan over and Joe Root sustained his form with a half-century, they lost three wickets in the first Powerplay and six before the halfway stage. Taylor played for non-existent spin – Sachithra Senanayake’s new action has left him tidy but lacking bite – Bopara edged a wide one and Buttler, sent back by Root, was run-out by a brilliant pick up and throw from Lahiru Thirimanne.

Suranga Lakmal, brought in for the dropped Dhammika Prasad, bowled with impressive hostility to claim career-best ODI figures. Eoin Morgan was unfortunate to receive a brute of a lifter first delivery and could only glove it to the keeper, Root missed an attempted scoop and Chris Jordan edged one that nipped away.

While Woakes produced a fluent innings, the damage was long since done. It was Sangakkara’s day, for sure, but it might be Cook who looks back on it as a defining moment in his career.