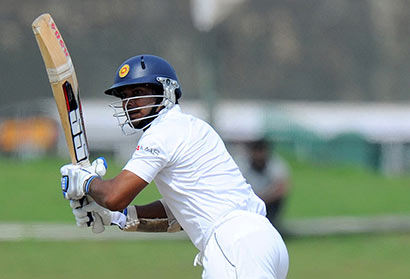 Kumar Sangakkara struck his 37th test hundred as he and his retiring team mate Mahela Jayawardene powered Sri Lanka to 252 for two wickets before rain washed out the final session on day three of the first test against Pakistan on Friday.

In reply to Pakistan’s first innings total of 451, Sri Lanka were cruising when rain forced an early tea and a subsequent heavy downpour ensured not another delivery was bowled at the water-logged Galle International Stadium.

Sangakkara remained unbeaten on 102 off 218 balls, having hit 13 fours in his 10th century against Pakistan while Jayawardene was batting on 55.

The pair have added 108 runs for the third wicket, the 18th century partnership between them, with the hosts still trailing Pakistan by 199 runs.

Sangakkara brought up his century shortly before the early tea break with a cut through point region off left-arm spinner Abdur Rehman for four.

The 36-year-old left-hander as well as Jayawardene, who quits test cricket after the two-match series against Pakistan, survived strong lbw appeals to deny the tourists any success in the rain-shortened 85 minute afternoon session.

Jayawardene, on 11, did not offer shot to a ball from Junaid Khan and was given out by the umpire but after he called for a review the replays showed the ball was missing the off stump and he was given a reprieve.

Pakistan lost another review of an lbw decision when Junaid hit Sangakkara’s pad with the batsman on 62 but the point of impact was found outside the off stump.

The only wicket to fall in the morning session was that of opener Kaushal Silva, who was out for 64 off 140 balls with 11 fours in his compact innings.

Silva shared a 120-run stand with Sangakkara but was out to Mohammad Talha when he got a thick edge to wicketkeeper Sarfraz Ahmed, who dived forward to hold a fine catch.

Jayawardene, playing his final test at this venue, walked out to an explosion of firecrackers and guard of honour given by local schoolboys.

He got off the mark with a single and off the third ball square drove Ajmal for four to signal his positive intentions.