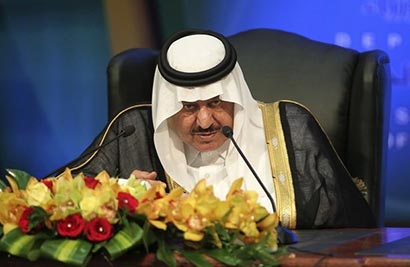 Nayef, interior minister since 1975 and thought to be 78, was the heir to Saudi King Abdullah and was appointed crown prince in October after the death of his elder brother and predecessor in the role, Crown Prince Sultan.

State television said the burial would be in Mecca on Sunday.

His death means the 89-year-old King Abdullah must nominate a new heir for the second time in nine months.

Defence Minister Prince Salman, 76, seen as likely to continue King Abdullah’s cautious reforms, has long been viewed as the next most senior prince in the kingdom’s succession.

Nayef had a reputation as a steely conservative who opposed King Abdullah’s reforms and developed a formidable security infrastructure that crushed al Qaeda but also locked up some political activists.

He, King Abdullah and Salman are among the nearly 40 sons of Saudi Arabia’s founder, Abdulaziz ibn Saud, who established the kingdom in 1935.

Salman was made defence minister in November and had served as Riyadh governor for five decades.

Nayef went to Switzerland for medical tests in May.