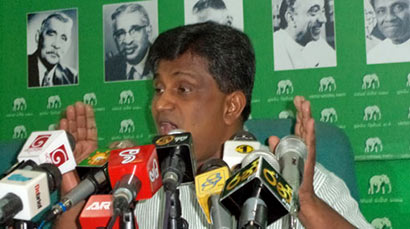 Deputy power minister has warned of a “serious security threat” to its electricity grid as engineers finally managed to get the Norochcholai power plant to function fully this morning.

Deputy power minister Ajith Perera said investigators had not ruled out sabotage in Sunday’s blast and a fire at the main distribution centre just outside the capital.

“There is a serious security threat. That is why the military has been called in to protect these (electricity) locations,” the minister told reporters in Colombo.

He said investigators had so far been unable to determine the cause of the blast that plunged the country into darkness for about eight hours, the worst black-out in 20 years. Sri Lanka’s army, navy and airforce have been deployed to provide round-the-clock protection to all installations.

The military was deployed at vital sites during the island’s decades-long Tamil separatist war that ended in May 2009, but there have been no guerrilla-related attacks in the past seven years.

Authorities imposed electricity rationing of seven-and-a-half hours daily as engineers tried to restore normal supplies after Sunday’s fire. But by Thursday night, authorities had managed to get the system fully back online.

The US$1.35 billion plant commissioned in 2011 has been plagued with frequent breakdowns, he said.

Sunday’s was the second major power failure in less than a month and the worst since May 1996, when the entire country was without electricity for four days, AFP reports.