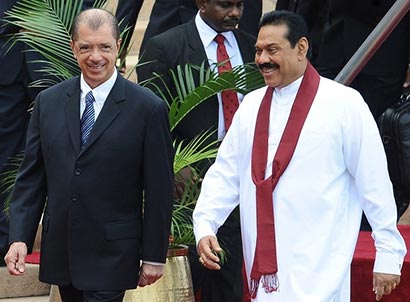 The government of Seychelles has said it will assist with all formal requests for an investigation into the assets of Sri Lanka’s former president.

The Seychelles Ministry of Foreign Affairs (MFA) said this in a press statement released yesterday after reports surfaced recently in the Sri Lankan media that the country’s newly-inaugurated President Maithripala Sirisena’s government would be pursuing an investigation against former President, Mahinda Rajapaksa, in connection with allegations of stolen assets hidden in the Seychelles.

According to a Sri Lankan news website called the Asian Mirror, Sri Lanka’s Deputy Minister of Planning and Economic Development, Harsha de Silva, accused the Seychelles of being a “safe haven” for stolen assets as well as a “money laundering hub”, allegations which the Minister of Foreign Affairs, Jean Paul Adam, has refuted.

“The allegations made against our financial services sector are unfounded,” said the Minister, who said that Seychelles’ priority was to continue to build on the partnership between the two Indian Ocean island nations.

The minister has said that any foreign investments in Seychelles made by Sri Lankans could be verified under the Double Taxation Avoidance Agreement signed between the two countries, which included a standard Tax Information Exchange Component.

There are around 140,000 international business companies (IBCs) in Seychelles’ offshore sector, compared to just 650 companies when the Indian Ocean island state launched its offshore business in 1996.

The Organisation for Economic Co-operation and Development (OECD) had raised concerns in 2013 regarding Seychelles jurisdiction in terms of tax transparency rules, along with Switzerland and Cyprus.

Seychelles authorities have, as a response to these concerns, passed legislation governing its growing offshore financial sector in an effort to prevent money laundering activities. The National Assembly passed amendments and new sections to its 1994 International Business Companies Act to meet the standards and recommendations of the OECD, and a regulatory body, called the Financial Services Agency (FSA) was also set up in 2014 to oversee corporate services providers, securities exchange, insurance and other businesses related to international financial services.

De Silva reportedly told the Asian Mirror that the Sri Lankan government were still considering the various methods of pursuing the investigation, including working with private auditors and seeking the help of the Stolen Assets Recovery Programme of the World Bank.

In July last year, De Silva claimed that Rajapaksa was helped by Seychelles to transfer money “swindled from development projects” into a Swiss bank account, an allegation that was at the time rejected by Minister Adam in the National Assembly.

In light of the new Sri Lankan administration’s tough attitude towards Rajapaksa’s time in office, the Seychelles Ministry of Foreign Affairs will no doubt face a tough battle to make new alliances to save years of work towards establishing firm bilateral relations and cooperation with their island neighbours.

As a result of Rajapaksa’s friendly relations with Seychelles President James Michel, cooperation was established between the Seychelles and Sri Lankan chambers of commerce and a multitude of cooperation agreements in a number of fields, including maritime, fisheries, health and education.

According to Minister Adam, all of these achievements are of immense benefit to both nations, and go ‘beyond politics’.

“There are so many areas where mutually beneficial partnerships have been formed – from the boats being built by Seychellois in Sri Lankan shipyards to the emergence of Sri Lanka as one of the preferred destinations for Seychellois for tourism, including medical tourism. These ties go beyond politics,” said the minister in his statement.

Yesterday, Minister Adam met with the resident Sri Lankan High Commissioner to the Seychelles, Rajatha Piyatissa to address these concerns, to which the high commissioner responded that both nations shared “a mutually beneficial partnership across a variety of fields that should be fostered.”

Seychelles is a signatory member of a number of international conventions dealing primarily with organised crime, as well as being a member of the Egmont Group, the network of financial intelligence units, while also engaging with the Stolen Assets Recovery (STAR) program of the World Bank in cases of abuses of Seychelles’ financial services sector.