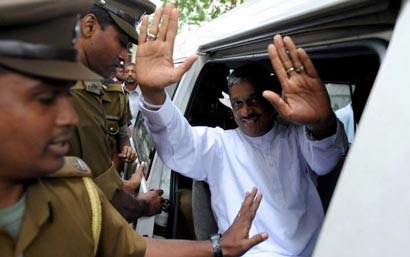 The Court of Appeal yesterday granted time till October 3 to the Elections Commissioner to file objections in respect of the writ petition filed by former Army Commander Sarath Fonseka who seeks to have his seat in parliament restored.

The matter was taken up for inquiry by a Bench comprising Justices W.L. Ranjith Silva and Upaly Abeyratne.

Mr. Fonseka is asking the Court to issue an interim order suspending the operation of the letters until the final determination of this application.

He is also seeking the Court to stay the operation of the Gazette Notification declaring the 7th Respondent as being duly elected as a Member of Parliament from the Colombo District until the final determination of this application.

Mr. Fonseka is also asking the Court to grant and issue a mandate in the nature of a Writ of Mandamus directing the 1st and 5th Respondents to take all necessary steps according to law to enable the Petitioner to sit and vote in Parliament and to exercise his powers, privileges and immunities as a Member of Parliament.