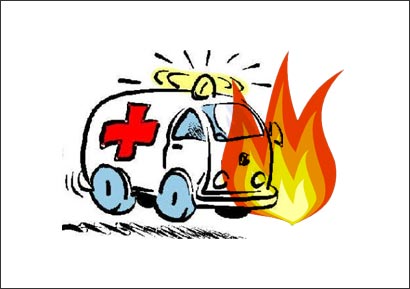 Two persons, including a sick child, died on the spot and 12 others were injured in a head on collision between an ambulance and a CTB bus at the Walliwela bend on the Matale- Dambulla main road yesterday afternoon.

The ambulance was transporting several patients including a 12-year-old boy to the Polonnaruwa Hospital from a clinic in the Kandy Hospital when it met with the accident.

The driver of the ambulance Lalith Nishantha Kularatne (45) and D.G. Mahesh (12) died on the spot. A nurse attached to the Polonnaruwa hospital, the ambulance cleaner and two patients who were in the ambulance as well as eight passengers traveling on the bus were injured and were admitted to Matale hospital.

A hospital spokesman said that eight of those admitted were in a critical condition. Police said that a private bus and the CTB bus were racing each other and that the private bus had hit the rear of the CTB bus causing it to collide with the ambulance. OIC Mahawela Police S.P.Abesinghe was conducting further inquiries into the incident.