THERE IS NO RULE OF LAW: ONLY THE DEITIES TO TAKE OUR GRIEVANCES: ANOMA 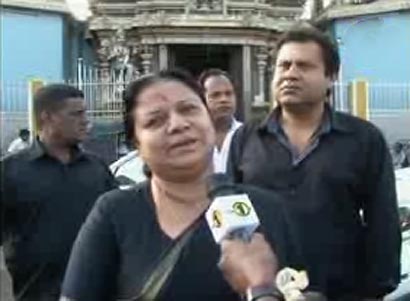 Today, there is no rule of law in the country. Only the deities are left to take our grievances, says Anoma Fonseka, wife of former Army Commander Sarath Fonseka.

She made this statement yesterday taking part in a pooja held at the Kali Amma Kovil in Mutwal to mark the completion of a year since the former Army Commander was imprisoned.

“In our country, it’s always injustice that had prevailed. I have only one thing to say. I prayed to the deities that the eyes may be opened of all those involved in this great injustice, from the top downwards.

“Today, only the deities are left to take our grievances. Other than that, there is no rule of law,” said Anoma Fonseka.

Meanwhile, a protest was staged in Borella this afternoon to mark one year since former Army Commander Sarath Fonseka was incarcerated.

It was organised by the People’s Movement for Democracy and attended by a large group including many political party leaders.

11 Responses to THERE IS NO RULE OF LAW: ONLY THE DEITIES TO TAKE OUR GRIEVANCES: ANOMA