SJB rally goes ahead with crowds thronging the venue 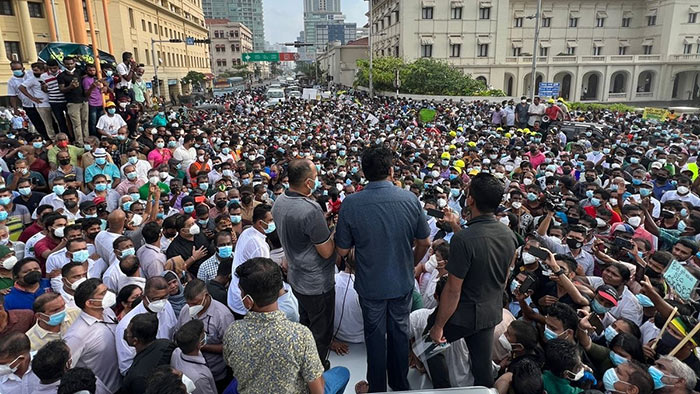 The Samagi Jana Balawegaya (SJB) held a rally under the slogan ‘People’s Power against the Cursed Government’, yesterday (16) at the Galle Face Green roundabout. Despite the Government introducing revised health guidelines a few hours before the rally commenced, banning public gatherings and protests, the SJB mustered a large gathering. Roads leading to the Liberty Roundabout and Galle Face were blocked as protesters marched on the streets.

Addressing the gathering, Opposition Leader Sajith Premadasa ridiculed the Government for fighting the Opposition and for failing to notice the power of people that flocked around SJB after every failure of this Government.

“We have defeated the suppression of this corrupt system by holding the protest and have rejuvenated freedom of speech. The Government was attempting to use COVID-19 health guidelines as a ruse to suppress the Opposition and public freedom, instead of defeating the pandemic. There were many other political parties which held protests and ceremonies in the midst of the pandemic but no circulars or orders were issued to prevent them from going ahead. Those whom the Government favoured were given the freedom to hold protests ensuring their freedom of speech with no restrictions whatsoever but when it came to us they tried every means to curb the protest.

“The Government is moving backwards to the era of 1970s. The public has to stand in long queues to purchase dry rations, kerosene oil, gas, petrol and essential items. The Government that claims it is going through a foreign currency crisis and cannot afford to purchase crude oil was now proposing to import refined oil all of a sudden. This is an attempt to earn large commission through instant acquisitions,” Premadasa said.

Meanwhile, heavy traffic was witnessed due to the rally where many wearing masks and following health guidelines.

Home » SJB rally goes ahead with crowds thronging the venue