SL has inner strength to solve its problems – Cardinal 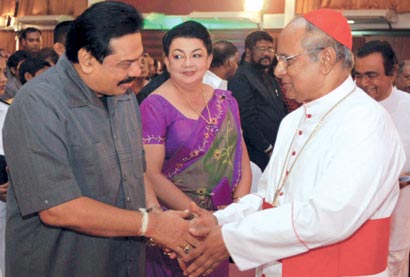 Archbishop of Colombo Rev Malcolm Cardinal Ranjith on Thursday said that Sri Lanka is capable of solving its own problems and attempts by some to run to the international community to solve problems is not acceptable.

“We can solve our own problems because we have religious, spiritual and the moral rectitude necessary in our own cultures to solve our problems by ourselves. We also have the necessary courage to do that because we are a people of courage,” he said.

He was of the view that the country has a golden opportunity to usher in a period of co-existence, harmony and peace among the different national and religious groups in this country.

The Cardinal was speaking at the State Christmas Festival held at Temple Trees on Thursday under the patronage of President Mahinda Rajapaksa. “These days we have had the release of the report of the Lessons Learnt and Reconciliation Commission (LLRC) which is our own organization where our people were members, participated, where many people gave evidence from our own country. We can say the voice of our own people, those who have suffered the difficulties of the war have been recorded in this document,” he said.

“We have to be happy about it. We don’t have to feel that it has to be the answer to all our questions. Still we can present it as a report that will help us to achieve or start work towards achieving peace in our country,” he added.

He added that the suggestions made by the LLRC also help the country understand the truth of certain dark corners of the conflict that have not been brought out so far. “It will help us to overcome our difficulties and our differences and it will make that process launched firmly for the future,” the Archbishop said.

“Let us take steps necessary in order not to create the mentality of we versus you but we all together. We would like to request His Excellency the President and the different political leaders of this country to work towards this. I would say that this will not be such a difficult problem if we all get together and work towards this,” he added.

He said that the country has faced challenges.

“The first challenge is how to unite our people removing all the causes of that conflict and ensuring that there is peace, harmony, equality and dignity for all peoples in this country,” he said.

The Archbishop also added that it was also part of that challenge to ensure that another conflict will not arise in the country. He also stressed the importance of overcoming selfishness whether it is manifested in the form of our love, for our language, our race or our religion.

The Archbishop emphasized the necessity of erasing all differences and making all people in the country realize that they have all won the battle of peace.

Home » SL has inner strength to solve its problems – Cardinal