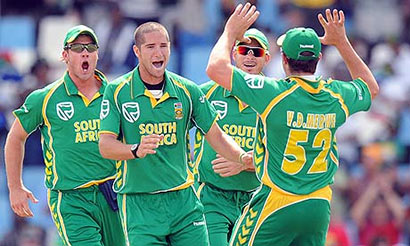 The world famous Proteas will go all out to beat the Lions in their homeland and it will be explosive cricket all around in the next few weeks.

This is their third tour of Sri Lanka.  South Africa team’s first visit  to Sri Lanka was  in 1993 under the captaincy of Kepler Wessels.. Proteas will play in Colombo, Kandy and move on to Hambantota for the final two T20 matches on this tour. the full schedule is attached herewith.Tthis will be the first instant the Sri Lankan heroes will play the match under the sponsorship of their new team sponsor Dialog Axiata PLC who signed a three-year deal  recently.

In Hambantota the Sri Lankan team will stay at the newly built Grand Udawalawe Safari Resort and the South African team will be at Peacock Beach Hotel, Hambantota.

Tickets are being sold at at SLC and at the grounds. Tickets can be bought online at www.srilankacricket.lk