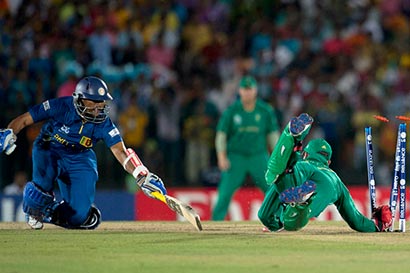 AB de Villiers gave the big crowd at Hambantota as much entertainment as he could as South Africa won a seven-over-a-side shootout against the hosts. The fixture was the most anticipated in Group C but a two-hour 45-minute rain delay meant the contest was curtailed and the result, another one-sided mis-match in a tournament crying out for proper competition.

De Villiers’ 30 off 13 balls and baseball style run out of Tillakaratne Dilshan set the tone for a match dominated by South Africa. Together with Dale Steyn’s controlled use of pace and movement, he ensured Sri Lanka were never able to get into the match, despite the two early wickets they claimed.

With a licence to go boom or bust, Richard Levi ended up doing the latter when he was deceived by a Nuwan Kulasekera’s slower ball. Levi chipped an attempted swipe through the leg-side to mid-on where Dilshan Munaweera had run backwards and made ground to take what will be one of the catches of the tournament.

Hashim Amla showed early intent and sent two of Lasith Malinga’s full deliveries over extra cover for boundaries. But a rush of blood to the end ended his time at the crease. He swung wildly at a ball angled in to him from Rangana Herath and was stumped by quick work from Kumar Sangakkara down the leg-side.

Faf du Plessis was promoted up the order to No. 3 to find form but he did not discover much. Instead, de Villiers stole the show. He reverse-swept Herath and heaved him down the ground for six before smashing a Malinga’s short ball over midwicket. JP Duminy ended the South African innings strongly, with 10 runs off the last two balls.

Sri Lanka were pegged back in the first over when Dilshan was run out without facing a ball. Mahela Jayawardene called Dilshan through for a run after hitting the ball to extra cover but Dilshan was too slow. Albie Morkel’s throw was flat and de Villiers took it on the run and dived into the stumps. The South Africa captain took a whack to the left arm and received some treatment but far greater damage was done to Sri Lanka’s chances of winning the match.

Jayawardene fell trying to force runs off Dale Steyn and was caught at deep-square leg and Sri Lanka had all but lost the match in two overs. South Africa dropped three catches but were still offered chances. Kumar Sangakkara, Thisara Perera and Munaweera were all dismissed attempting big shots, something that could not be avoided in the context of the match.

Given the playing conditions – a two-over Powerplay and two bowlers allowed a maximum of two overs each – neither side will read too much into the result. Both teams have qualified for the Super Eights and this result has no bearing on their groupings in the next round.