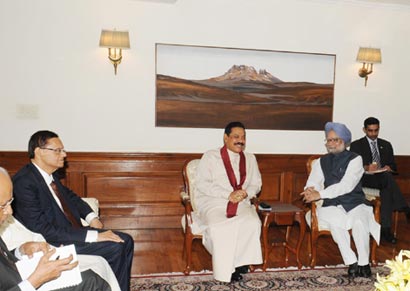 With Sri Lanka’s human rights record coming up for review towards the end of the year, India believes that Colombo should accept the Tamil National Alliance (TNA) as a credible interlocutor and get down to discussing a road map for political devolution of powers as this will send a positive signal world-wide to groups instrumental in arraigning it before the United Nations Human Rights Council in March this year.

During talks with Sri Lankan President Mahinda Rajapaksa on Thursday — the first in over two years — it is understood that Prime Minister Manmohan Singh reiterated that the sooner the Sri Lankan government finalises a road map with the TNA, the better it would be for all sides. India concedes that Colombo has engaged in serious dialogue with the TNA but feels that the time has come to convert it into a programme of action.

Mr. Rajapaksa is learnt to have said the issue has to be decided by the Select Committee of the Sri Lankan Parliament to which the two sides have not yet agreed. He assured the Prime Minister that he would talk to all the parties concerned to take it forward.

He said his government was planning to hold elections to the Tamil majority Northern Province but there were a number of steps that need to be taken, main among them being the “finalisation of electoral rolls” which would take some time.

New Delhi believes the ruling party is in a politically comfortable position to take the bold step of resolving the Tamil issue, especially in giving them political powers. In recent elections to three provinces, it won a majority in two and formed a coalition government in the Eastern Province which has a substantial Tamil population. On the other hand, the TNA too proved its credibility in the polls to the Eastern Province by winning 11 out of 35 seats despite a divided polity.

It is learnt that vote at the UNHRC in March this year (in which India voted against Sri Lanka) did not come up in the delegation-level talks. But it may have figured during the restricted talks between Dr. Singh and Mr. Rajapaksa.

In addition to the fishermen issue, a Comprehensive Economic Partnership Agreement (CEPA), power linkages between the two countries and oil and gas also figured in the talks.

On Indian fishermen being allegedly attacked by the Sri Lankan Navy, the Prime Minister suggested that those who cross the maritime boundary line should not be attacked to which the Sri Lankan President said he had asked his Navy to operate with maximum restraint. However, the situation is not as simplistic despite one narrative from some political quarters here suggesting that the friction between the two sides is due to Indian fishermen being set upon by the Sri Lankan Navy.

In fact, New Delhi acknowledges — which is proved by satellite photos shown to the media here — that Indian fishermen go deep in the Sri Lankan waters in armadas of 1,000 boats at a time – captured on film by a foreign TV network too. There are also organised groups operating from some islands facilitating such an intimidating foray to dominate the Sri Lankan maritime waters and keep at bay Tamil-origin Sri Lankan fishermen who had been barred by their security forces from fishing till the war against the LTTE ended in 2009.

Now there is increasing agitation in parts of Tamil-dominated northern Sri Lanka as its fishermen are denied the one source of livelihood they had hoped to recover. Both sides feel the fishermen associations from both sides should be more actively involved in direct dialogue. But the answer also lay in exploiting the maritime resources in the open seas nearby which are currently being used for fishing by sophisticated trawlers by countries 2,000 km away.