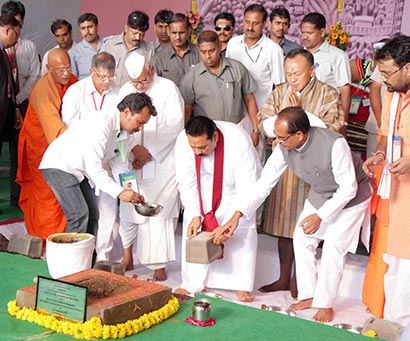 President Mahinda Rajapaksa laid the foundation stone for the construction of the International University of Buddhist and Indic Studies in the ancient Buddhist city of Sanchi in the presence of dignitaries from Bhutan, Myanmar, Thailand, Japan, Cambodia, Mongolia, Nepal and India.

In the meantime, before the laying of the foundation stone for the Buddhist University, dignitaries paid homage to the Holy Relics of Arahath Seriyuth Mugalan, the chief disciples of Lord Buddha. The President also joined in an observation tour of the Sanchi Stupa precincts after participating in religious observances. President Rajapaksa together with Bhutan’s Prime Minister Jigme Yoser Thinley planted a sapling of the sacred Sri Maha Bodhi Tree in Mahamevna Uyana, Anuradhapura, Sri Lanka which is believed to be a sapling of the original Bodhi tree in Boddhagaya under which Buddha attained enlightenment 2600 years ago. It was specially brought from Sri Lanka to plant near the Sanchi Stupa

Addressing the ceremony, President Rajapaksa said that his journey to Sanchi, is primarily an act of gratitude on behalf of the people of Sri Lanka. Thanking for the historic opportunity to lay the foundation stone, the President said the Buddha’s message of tolerance and understanding is of great relevance today, as the “tragic results of enmity and hatred towards other faiths leading to violence and destruction, and great loss to societies” are seen. “It is of equal importance in the East and West alike,” said the President adding that undoubtedly there is a need to go back to the roots of civilizations and search for the wisdom that prevailed in the ancient world.

“The Buddhist and Indic value systems that paved the way to modern concepts of human rights and fundamental freedoms need to be revived,” the President noted.

He expressed the hope that the University of Buddhist and Indic Studies will grow strong and the graduates of the University will be inspired by the Buddha’s teachings.

Recalling Mahatma Gandhi as the greatest son of modern India, he said people on both sides of the country have duty to spread the message of non-violence, peace and compassion to the world which is “trapped in material-based progress”.

The President pointed out profound contribution by Dr B.R. Ambedkar for the revival of Buddhist thought in India and his efforts to incorporate Buddhist and Indic values in the modern day governance systems of the country.

“The Government and people of Sri Lanka and I will continue to contribute towards the success of this University,” he finally assured.

As a special feature, a group of artists of Police band played national anthems of three nations- Sri Lanka, Bhutan and India at the end of the programme. Artists also presented various colourful folk dances by Goud and Korku tribal dancers.  Scores of Buddhists and villagers from nearby areas have put colourful flags and other decorative items along the roads leading to Sanchi from Bhopal and other areas. President Rajapaksa also visited the Mahabodhi Society of Sri Lanka at Sanchi before leaving for Delhi via Bhopal.

Elaborate security arrangements are put in place for the President’s visit in view of the protest by pro Tamil Tiger groups. Borders of Sanchi town have been sealed as part of the security measure. However Police have arrested with the mediation of the Indian Central Government a group of nearly 1000 LTTE loyalists for attempting to sabotage the President’s Indian visit.

Reports emanating from India said that 700 persons along with MDMK Party Leader of India Y. Gopal Swamy alias Vaiko were apprehended on Friday morning when they attempted to forcibly enter the Sanchi City.

Buddhist studies and research will be carried out at this University which is being established in the Sanchi City where places of Buddhist worship prevailed since third century BC. In addition to the conduct of Buddhist research and the provision of Post Degree in the field of Buddhist education, teaching in relation to the Buddha Dhamma on archaeology and Arts will also be undertaken at this University. It will also have a Buddhist Library of international standard.

Plans are underway for the construction of a conference hall and a sports complex to bring about a renaissance in the Sanchi area. Sri Lanka will contribute to the architecture of the Project.

Here is the full text of President Mahinda Rajapaksa’s address at Sanchi.

I bring to you, the warm greetings of your brothers and sisters in Sri Lanka.

Over 2300 years ago, it was from this sacred land in Sanchi that your Great Emperor, Asoka sent his son and daughter, Arahat Mahinda and Theri Sanghamitta, to my country. They arrived in Sri Lanka, in peace and friendship. They brought with them, the Message of the Great Teacher, Gautama Buddha – a Message of compassion, non-violence, equanimity, tolerance and understanding.

They were received by my ancestors in Sri Lanka with deep reverence. Theri Sanghamitta brought to Sri Lanka, a sapling of the pipal tree in Bodhgaya, under which Prince Siddhartha attained enlightenment as Gautama Buddha, the Two thousand six hundredth anniversary of which we celebrate this year. This sacred tree, accepted as the oldest historically recorded tree in the world, which remains in Anuradhapura in my country, to this day, has been worshipped since the 3rd Century BC. Today I have brought back a sapling of the same tree to be planted in this sacred land for veneration by those who visit Sanchi.

In the second week after enlightenment, the Buddha spent seven days in meditation in gratitude to the Bodhi Tree that gave him shelter in his search for the truth of samsara. The deep sense of respect for nature among Buddhists in my country has its roots in this great act of gratitude of the Buddha. It also has an important message in today’s need for protection of the environment and sustainable development.

My journey to Sanchi today, is primarily an act of gratitude on behalf of the people of my country; I am here as a pilgrim, in veneration of sacred Sanchi, saluting and celebrating the glorious past of this region.

I thank you for inviting me to this sacred land and giving me the honour of participating in the Foundation Laying Ceremony of the ‘Sanchi University of Buddhist and Indic Studies’. By this, you not only honour me but also the people of my country who value the historical bond between Sanchi and Sri Lanka.

As you may know, an ever-increasing number of Sri Lankans, at present over 150,000, who visit this sacred region every year, receive the welcoming hospitality of the Government and people of Madhya Pradesh, a state that is hailed as one of the most tranquil in India.

Your great Emperor Asoka, following the teachings of tolerance and understanding of the Buddha, honoured and supported all other religions in his empire. He declared that one should not honour only one’s own religion and condemn the religions of others, but one should honour the faiths of others, as well.

We must recall that the greatest son of modern India – Mahatma Gandhi –, who gave spiritual strength to the freedom movement, was moved by the great values of non-violence, peace and compassion which remain among the core values of our region. I believe it is our duty as well to spread this message further and deeper, both in our own lands and the larger world that is trapped in material-based progress.

On this occasion we must also pay tribute to other great sons of our region for their contribution to the revival of Buddhist and Indic thought, values, and practice both in India and beyond. Anagarika Dharmapala, the well-known Sri Lankan Buddhist sage spent a life-time in India, working on rehabilitation of ancient Buddhist sites of worship. Next year, 2013, will be the 120th Anniversary of his memorable address at the World Parliament of Religions in Chicago, on Buddhism. Anagarika Dharmapala was joined by Swami Vivekananda at the World Parliament who spoke equally eloquently, on Hinduism.

We must also honour the memory of Dr. B.R. Ambedkar for his profound contribution to the revival of Buddhist thought in this Land of the Buddha; and for his efforts to incorporate Buddhist and Indic values in the modern day governance systems of India.

This University seeks to follow a unique path in higher education in the pattern of classical Indian Universities, such as Takshila, Nalanda, Vallabhi and Vikramshila. I believe it will focus on the study, research and spread of knowledge of Buddhist thought, in all its rich and varied dimensions.

It is more than a coincidence that this happy and auspicious occasion is graced by two heads of Government of two nations in South Asia: Bhutan and Sri Lanka. Both our countries have benefitted from the spark of civilization that came with the dawn of Buddhist practice in our nations. I am very pleased that the Prime Minister of our brotherly nation, Hon. Jigme Yoser Thinley is with me today to share the joy of this occasion.

Today’s conventional education that we have largely inherited from our colonial past often restricts development of the human mind and ignores the relationship between the mind and matters of life. Not only, does it focus on personal gain and ambition, but also gives rise to ruthless competition, and wasteful consumption. It fails to help individuals discover true and lasting values and to build a complete person capable of dealing successfully with life as a whole.

It is our long held tradition that a complete education must involve the awakening of the self and the cultivation of self-knowledge and wisdom and help fashion one’s life for the greater good of humankind.

This University will revive Buddhist and Indic studies based on the ancient concepts of teaching, self-enquiry, and traditional knowledge. It will fulfil a much needed role in our region which is today troubled by the ill-effects of commercialisation, urbanisation, de-forestation, and intense competition. We believe it will seek ways and means to revive the traditional concepts of social responsibility.

Undoubtedly, there is a need to go back to the roots of our civilizations and search for the wisdom that prevailed in our ancient world. The Buddhist and Indic value systems that paved the way to modern concepts of human rights and fundamental freedoms need to be revived.

In this context, it is our hope that the wisdom that will in time come from the work of the ‘University of Buddhist and Indic Studies’ becomes a beacon of light for our region as we battle against: intolerance and hatred; separatism and ethnic prejudice; terrorism and violence; and social inequality and exclusion.

Before I conclude, it is important to recall that we in Sri Lanka have always considered India as a friendly land and people. As in the past, our people still refer to India as Dambadiva and Jambudveepa and still undertake pilgrimages to Dambadiva. The federal structure and the emergence of states has not erased our vision of India as a single land of friendship with the great bonds of history. Our traditional education also owes much to the early Indian and larger Indic traditions. I believe this tradition of embracing all of India in friendship will continue to enrich our relations.

The Government and people of Sri Lanka and I will continue to contribute towards the success of this University. I am confident that this University will grow from strength to strength and that men and women who will graduate from it will be inspired by the Buddha’s words, displayed on the pillar that we unveiled this afternoon:

“One who is virtuous and wise shines forth like a blazing fire.”

I wish you all, the blessings of the Noble Triple Gem: Buddha, Dhamma and Sangha. 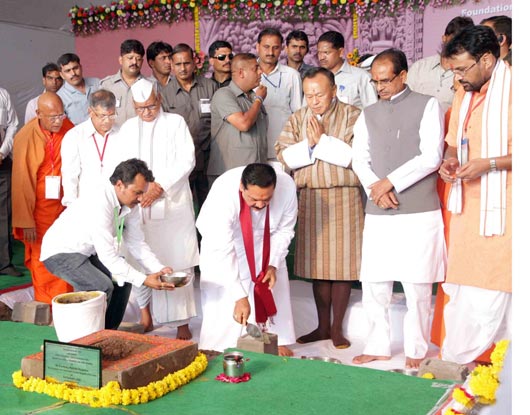 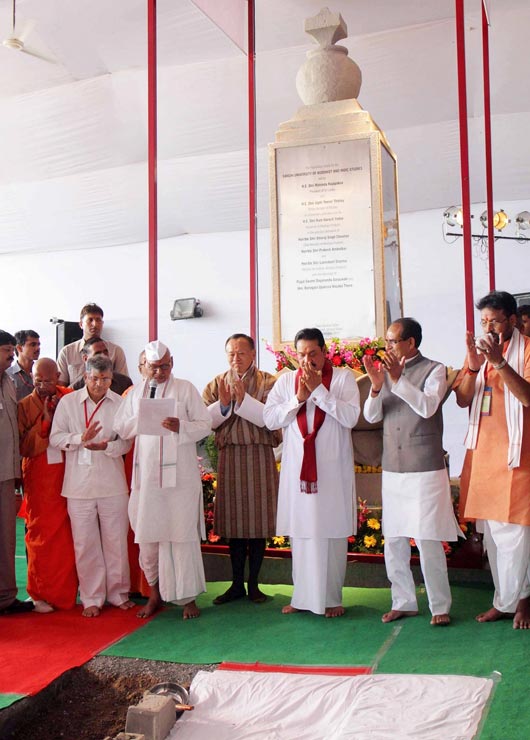 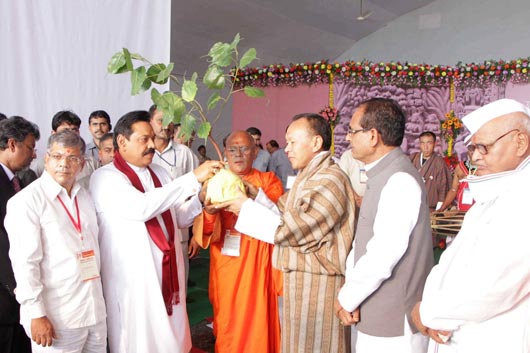 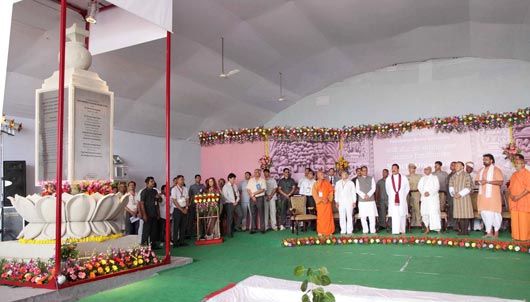 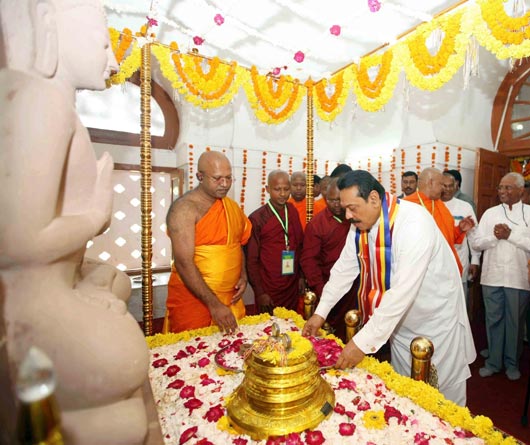 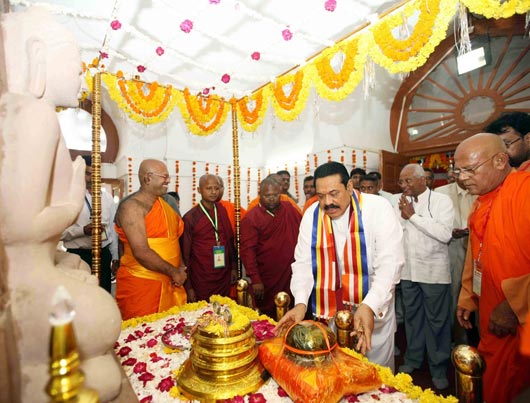 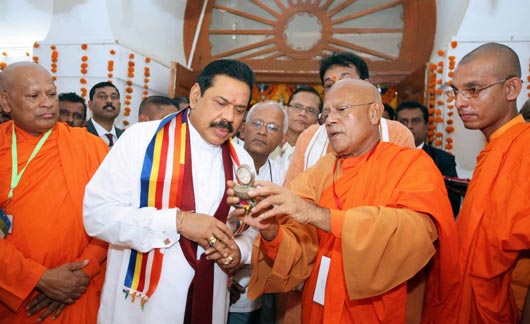 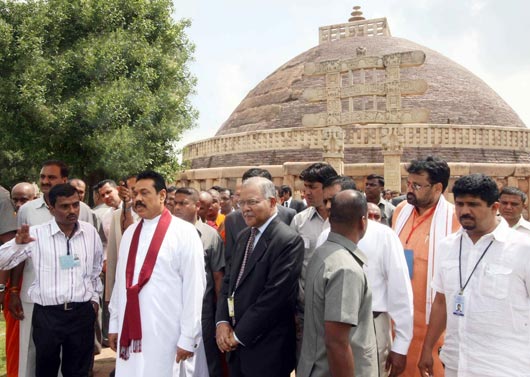 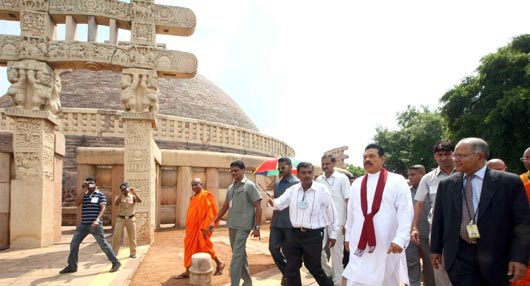 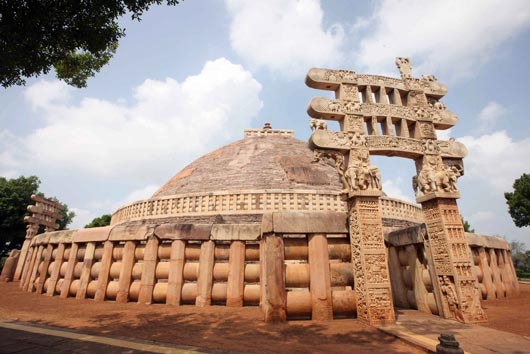 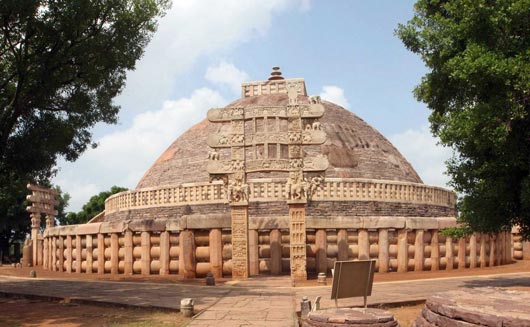